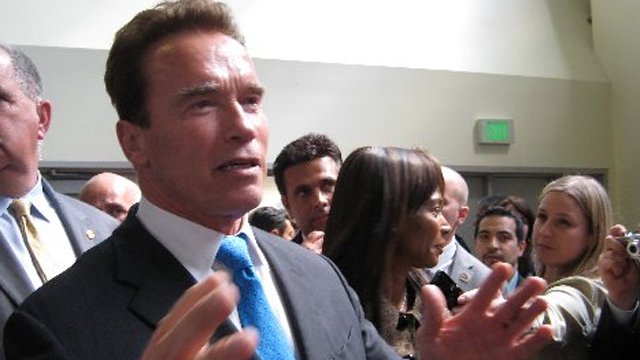 Since revealing he had an affair that resulted in a child, Arnold Schwarzenegger has become a hot topic and punchline for comedians.
May 19th, 2011
12:08 PM ET

The fallout from the revelation of Arnold Schwarzenegger's extramarital affair and the child he had with a household staffer has provided comedic fodder for celebrities. From "images" of Schwarzenegger's son to an old Hollywood view on infidelity, you've gotta watch how these jokesters tackle Ah-nald and his spectacular controversy.

Late-night tackles Schwarzenegger -You knew it would happen because for comics this scandal was too big to pass. Late-night monologues were filled with swipes at the former California governor and his outed secret.

Conan uncovers birth video of Schwarzenegger's love child – Late-night host Conan O'Brien claims he was able to get footage of the moment Arnold Schwarzenegger found out he'd be a new father. Watch Schwarzenegger's reaction to the birth of his son with his mistress.

A familiar feeling – Actress Debbie Reynolds knows all too well about dealing with the breakup of a high-profile marriage due to an extramarital affair. She offers her cheeky insight on Schwarzenegger' revelation.

What a wonderful tribute by Ō@FareedZakariaiaŌü® to his mother who is among the millions whoŌĆÖve died of COVID 19. twitter.com/i/web/status/1ŌĆ”6HJdALoc
susancandiotti