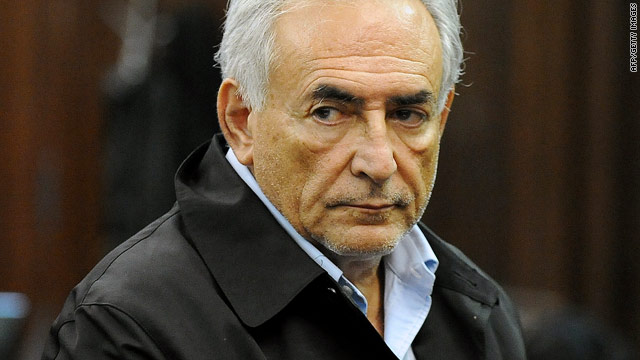 Dominique Strauss-Kahn, the head of the International Monetary Fund, resigned Wednesday, the organization said.
May 19th, 2011
12:45 AM ET

Dominique Strauss-Kahn, the head of the International Monetary Fund,  has tendered his resignation, the organization said.

Calls have been mounting for Strauss-Kahn's resignation since he was arrested on charges he sexually assaulted a maid in his hotel room.

"It is with infinite sadness that I feel compelled today to present to the Executive Board my resignation from my post of Managing Director of the IMF," Strauss-Kahn said in his resignation letter Wednesday to the IMF.

"I think at this time first of my wife - whom I love more than anything - of my children, of my family, of my friends."

Strauss-Kahn is being held at the Rikers Island jail complex without bail.

Counsel for Strauss-Kahn filed a new appeal on Wednesday seeking his release on bail from Rikers Island.

"We respectfully submit that the following bail conditions ... eliminate any concern that Mr. Strauss-Kahn would or could leave this court's jurisdiction," wrote lawyer Shawn P. Naunton. He then said the International Monetary Fund chief had agreed to post $1 million in cash, to be confined to home detention in Manhattan with electronic monitoring, and to turn over his U.N. travel document. The appeal noted that the Frenchman has already surrendered his passport.

A source close to the Strauss-Kahn defense told CNN's Jeffrey Toobin that a deal is in the works that could result in his being freed on bail as early as Thursday. The deal is tentative and could still fall through, but the defense was optimistic that Strauss-Kahn could be released soon.

Strauss-Kahn's bail appeal to the state Supreme Court will be heard Thursday. It adds conditions that were not in the appeal turned down Monday by a criminal court judge and describes the accused as "a loving husband and father, and a highly regarded international diplomat, lawyer, politician, economist and professor, with no prior criminal record."