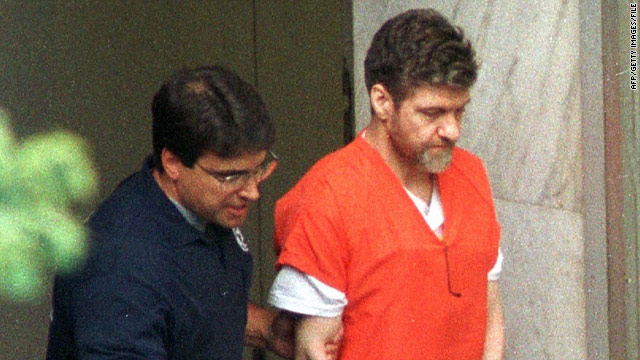 Ted Kaczynski, the convicted killer known as the Unabomber, is escorted from court after being sentenced to life in jail in 1998.
May 19th, 2011
10:30 AM ET

Authorities want to take DNA samples from "Unabomber" Ted Kaczynski in connection with their investigation into the 1982 incident in which seven people died after taking Tylenol capsules laced with potassium cyanide, according to the FBI office in Chicago.

"As part of the re-examination of the 1982 Tylenol poisonings, the FBI attempted to secure DNA from numerous individuals, including Ted Kaczynski," said Cynthia Yates, FBI spokeswoman. "To date, Kaczynski has declined to voluntarily provide samples."

However, in a handwritten motion filed in federal court aimed at stopping the online auction of possessions taken from his Montana cabin in 1996, Kaczynski writes that he did agree - with a condition - to provide the sample.

Kaczynski, 68, killed three people and wounded 23 others in a string of bombings from 1978 to 1995. The FBI dubbed him the "Unabomber" because of his early targets - universities and airlines. He was arrested in 1996, pleaded guilty in 1998 and is now serving a life term in the federal "Supermax" prison in Florence, Colorado.

On April 27, Kaczynski writes in the motion filed May 9, prison officials told him that "the Chicago office of the FBI wanted a sample of my DNA to compare with some partial DNA profiles connected with a 1982 event in which someone put potassium cyanide in Tylenol. The officers said the FBI was prepared to get a court order to compel me to provide the DNA sample, but wanted to know whether I would provide the sample voluntarily."

Kaczynski said he asked for time to think about it, and said he later sent a written response to prison officials saying he would provide the sample voluntarily "if the FBI would satisfy a certain condition that is not relevant here."