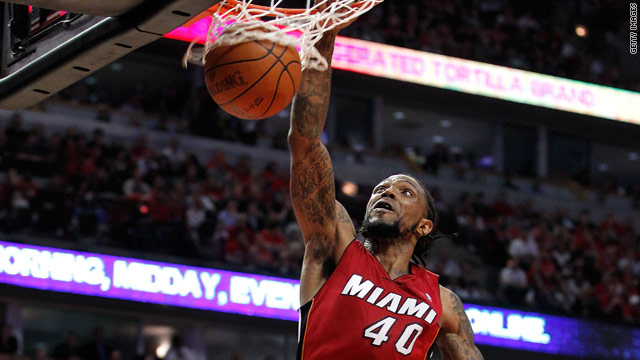 SI.com: Miami heats up against the Bulls to tie series

The Heat certainly aren't going down without a fight - and they proved that Wednesday night in a 85-75 victory over the Bulls. In the first few minutes of Game 2, the Heat seemed to have learned little from their first Eastern Conference final loss. But then came Udonis Haslem.

As SI.com's Ian Thomsen explains, Haslem wasn't a sure-fire answer to what was shaping up as a repeat performance of the Heat's Game 1 loss.

"Was he [ready]? No one could be sure," Thomsen writes of Haslem. "Not until he began to change the game, shouldering it and levering it and bodying up against the season-long trends that the Bulls had created and finally compelling them to swing the other way. Miami's 85-75 Game 2 victory Wednesday was won on the boards, in the paint and in transition, which is where Haslem used to thrive, and where he thrived now again. And not a game too late for the Heat."

But when all was said and done, Haslem's 13 points, five rebounds, two assists, one block and one steal in the course of 23 minutes - combined with LeBron James' 29 points and Dwyane Wade's 24 - proved to be a critical factor in the Heat's victory. With the series tied 1-1, expect Sunday's Game 3 match-up at American Airlines Center to be a hard-fought battle between Miami and Chicago.

Up tonight:
Oklahoma City Thunder vs. Dallas Mavericks (9:00 p.m., ET) - The Thunder will look to even up their Western Conference final when they take on the Dallas Mavericks at the American Airlines Center tonight.

$200,000 - Amount Players winner K.J. Choi donated to victims of the tornados that swept through the southeastern United States.