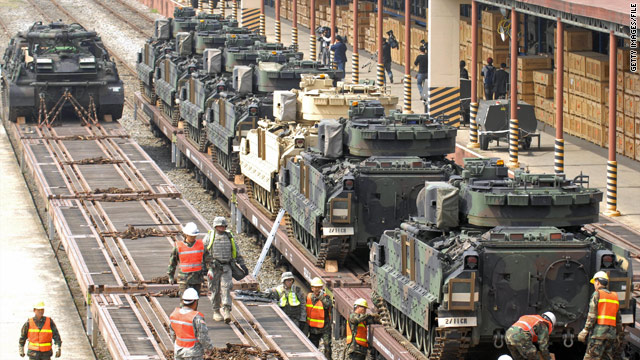 The U.S. military command in South Korea says it is investigating veterans' claims that they buried barrels of the toxic herbicide Agent Orange at a U.S. facility there in the late 1970s.

Arizona resident Steve House told CNN affiliate KPHO in Phoenix that in 1978, he was ordered to dig a long trench for "disposal" at Camp Carroll, where he was stationed as an Army heavy equipment operator.

He wasn't told what would be buried in the trench, but he says he saw it.

"Fifty-five-gallon drums with bright yellow, some of them bright orange, writing on them," House told KPHO. "And some of the cans said Province of Vietnam, Compound Orange."

The U.S. military sprayed Agent Orange from planes onto jungles in Vietnam to kill vegetation in an effort to expose guerrilla fighters. Exposure to the chemical has been blamed for a wide variety of ailments, including certain forms of cancer and nerve disorders. It also has been linked to birth defects, according to the Department of Veterans Affairs.

The military has always said that all leftover Agent Orange was incinerated at sea, but it is investigating nonetheless.

House's story was supported by Robert Travis, who served with him and now lives in West Virginia, according to the station.

"There was approximately 250 drums, all OD (olive drab) green," Travis told KPHO. "On the barrels it said, 'Chemicals type Agent Orange.' It had a stripe around the barrel dated 1967 for the Republic of Vietnam."

Travis recalled wheeling the barrels out of a warehouse at Camp Carroll, which GlobalSecurity.org says is home to the U.S. Army Material Support Center-Korea.Â  The camp is about 20 miles north of the major South Korean city of Daegu.

"This stuff was just seeping through the barrels," Travis said. "There was a smell ... I couldn't even describe it ... just sickly sweet."

"I am aware of and concerned with news reports alleging burial of Agent Orange at Camp Carroll," Gen. Walter L. Sharp, commander of United Nations Command, Combined Forces Command and U.S. Forces Korea, said in a news release. "Both Americans and Koreans live and work in and around Camp Carroll, and I share the concerns of the government of the Republic of Korea and the Korean people living near the installation. If any substances of concern are found, we will dispose of them properly."

House told KPHO he decided to come forward now because he thinks he may die soon.

President Joe Biden highlighted one way to tackle the climate crisis that goes beyond more funding for aerial firefâ€twitter.com/i/web/status/1â€¦zW
CNNweather

10:19 pm ET September 27, 2021 RETWEET
The Santa Ana winds will be increasing for Southern California this week. This could mean more fires for the southeâ€twitter.com/i/web/status/1â€¦Ye
CNNweather

7:36 pm ET September 27, 2021 RETWEET
A woman who was attempting to hike to Canada is facing charges connected with the Fawn Fire in California, which auâ€twitter.com/i/web/status/1â€¦98
CNNweather

5:58 pm ET September 27, 2021 RETWEET
Democrats are exploring adding a carbon tax to their massive $3.5 trillion budget bill as a way to offset some of tâ€twitter.com/i/web/status/1â€¦p1
CNNweather