Salman Rushdie's injuries in the attack include multiple stab wounds to his neck and stomach, and a puncture wound‚Ätwitter.com/i/web/status/1‚Ä¶9X

Man arraigned on attempted murder charge in the stabbing of author Salman Rushdie, who is reportedly on a ventilato‚Ätwitter.com/i/web/status/1‚Ä¶hM 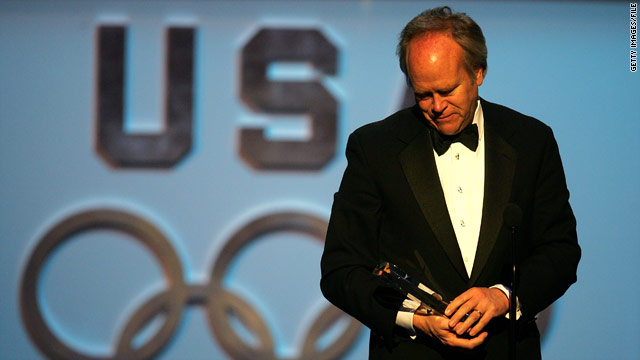 Along with ABC's Roone Arledge, Ebersol has defined the art of network sports coverage. Ebersol transformed the Olympic Games from a distant event into must-see TV that had an impact on all of broadcast journalism.

Thus, Ebersol's abrupt resignation as chairman of NBC Sports is a blow to the modern Olympic movement, said Bill Dwyre of the Los Angeles Times.¬ÝEbersol is to the Olympic Games¬Ý- and athletes - "as butter is to bread," Dwyre said.

"What he has done has been a service to athletes globally," Peter Ueberroth, the former U.S. Olympic Committee chairman and head of the 1984 Los Angeles Games, told the Los Angeles paper.

For NBC, the timing is horrible. Ebersol's resignation comes a few weeks before the International Olympic Committee holds a meeting with U.S. networks to decide on broadcast rights for the 2014 and 2016 Games.

Neither Ebersol nor NBC revealed what prompted his resignation, although The New York Times, which first reported the story, said Ebersol, 63,¬Ýcould not agree on a new contract with Comcast, which merged with NBC in January.

Five years ago,¬ÝSummers was paralyzed from the chest down by a hit-and-run driver. The British journal Lancet reported Thursday that Summers is the subject of an "unprecedented" therapeutic treatment that has allowed him to take a few steps, regain movement in various parts of his body, and¬Ý- with some assistance¬Ý- stand up for an hour at a time. According to the Los Angeles Times,¬Ýresearchers from the University of Louisville, University of California, Los Angeles, and the California Institute of Technology treated Summers' spinal cord with a form of electronic stimulation. "To everyone's disbelief," Summers told the Times, "I was able to stand independently the third day they turned it on."

In 2002, Shales, then a Washington Post columnist, and Miller, a former CNN executive producer, wrote an uncensored account of "Saturday Night Live's" formative years that remained on the best-seller list for 15 weeks. The two have reunited for a similar treatment of ESPN.

"Those Guys Have All the Fun: Inside the World of ESPN," to be released Tuesday, features personalities including Chris Berman, Robin Roberts, Erin Andrews and Keith Olbermann as well as some major sports stars, including Michael Jordan. The Los Angeles Daily News says the media-embargoed work has stories of "jock entitlement, sexcapades, drug use and workplace backstabbing" among the ESPN personnel. The book is already in the top¬Ýfive on Amazon.com.

4:45 am ET August 14, 2022 RETWEET
Priyanka Chopra Jonas will be this year's host of the Global Citizen Festival cnn.it/3QEnpVq
cnni

2:30 am ET August 14, 2022 RETWEET
The bathynomus yucatanensis is a species of giant isopod, crustaceans that scavenge for food at the bottom of the o‚Ätwitter.com/i/web/status/1‚Ä¶Lg
cnni

11:00 pm ET August 13, 2022 RETWEET
After shocks from Brexit and Covid, an apple farmer fears what‚Äôs next as England falls into drought.twitter.com/i/web/status/1‚Ä¶jfWp
cnni

Salman Rushdie's injuries in the attack include multiple stab wounds to his neck and stomach, and a puncture wound‚Ätwitter.com/i/web/status/1‚Ä¶9X
cnnbrk

3:49 pm ET August 13, 2022 RETWEET
Man arraigned on attempted murder charge in the stabbing of author Salman Rushdie, who is reportedly on a ventilato‚Ätwitter.com/i/web/status/1‚Ä¶hM
cnnbrk