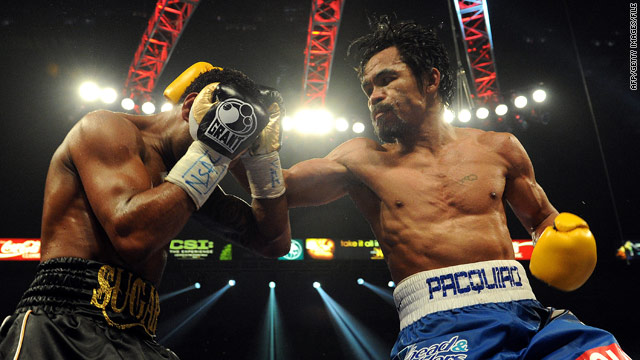 Manny Pacquiao, right, easily defeated Shane Mosely this month, but can he repeat in the Filipino birth control bout?
May 20th, 2011
04:05 PM ET

Manny Pacquaio's latest fight could be much tougher than pounding on “Sugar” Shane Mosley for 12 rounds.

Fresh off his trouncing of the American welterweight contender, Pacquiao, 32 – who also serves as a Sarangani representative in the Filipino Congress – has entered the ring again to denounce a reproductive health bill that he and his fellow lawmakers are considering.

The bill has several controversial provisions, such as the requirement that women experiencing problems after abortions, which would still be banned, must be treated humanely and compassionately.

Pacquiao and President Benigno Aquino III, a backer of the bill, agree abortion should be outlawed, The Manila Times reported. Where they part ways is on the issue of contraception, according to Filipino media.

Aquino believes couples should be educated on birth control and should be free to choose the method they deem most appropriate, the Philippine Daily Inquirer reported. Pacquiao, on the other glove, opposes contraception and paraphrased Genesis to defend his stance.

“God said, ‘Go forth and multiply.' He did not say, ‘Go and have just one or two children,’” the People’s Champ said, according the paper.

Some of the bill’s supporters slammed his literal interpretation of the Bible. Sen. Miriam Defensor-Santiago said the pugilist, who is Catholic, like 81% of Filipinos, was acting like a fundamentalist. Disregarding his status as a fellow legislator, she further questioned his foray into what she said was a sociopolitical issue.

“We cannot be know-it-alls. It will be very misleading to use his celebrity status to enter into what is, after all, a great debate on the political economy,” she told the Daily Inquirer.

The Phillipines’ GMA News reported this week that a doctor said Jinkee Pacquiao – also an opponent of the reproductive health bill – began using the pills after the couple’s fourth child, Queenie, was born. She took them to get back in shape, according to reports.

“That was in the past, but now she no longer does,” GMA quoted the eight-division champ as telling reporters.

Citing an April poll from the Guttmacher Institute, a nonprofit focusing on sex education and health, GMA News said Pacquiao’s wife wasn’t different from the overwhelming majority of Catholic women who have sex.

The poll states that 98% of those polled have used some means of contraception “other than natural family planning.”