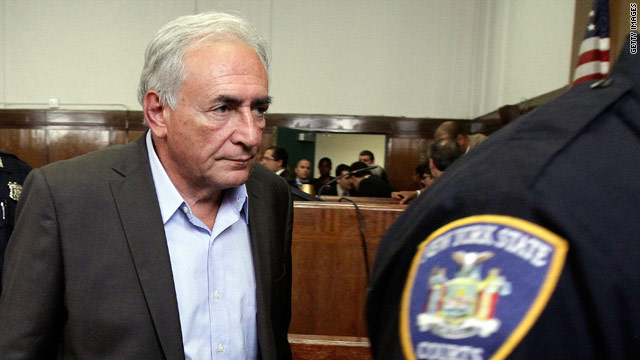 Strauss-Kahn release: Former International Monetary Fund chief Dominique Strauss-Kahn is expected to be released from jail Friday after being granted bail on charges related to the alleged assault of a housekeeper in a New York hotel, his attorney said. "It's a great relief to the family to be able to have him with them," defense attorney Bill Taylor told reporters outside the courtroom Thursday. He said his client was spending the night at the jail on Rikers Island before being released Friday.

The next court appearance is set for June 6. Supreme Court Judge Michael Obus granted bail on condition that Strauss-Kahn post $1 million in cash and a $5 million bond, surrender his travel documents and submit to home detention.

Obama-Netanyahu meeting: There is likely to be some tension at the White House on Friday when President Barack Obama meets with Israeli Prime Minister Benjamin Netanyahu the day after laying out his vision for the Middle East and North Africa. In his speech Thursday at the State Department, Obama said the pre-1967 borders of Israel should serve as the basis for negotiations in the formation of a future Palestinian state "with mutually agreed swaps, so that secure and recognized borders are established for both states."

In a statement issued in Jerusalem before his departure for Washington, Netanyahu said such borders would leave Israel "indefensible," by putting major Israeli population centers beyond those lines. Both leaders are set to make statements in the Oval Office around noon.

Mississippi flooding: The Mississippi River is expected to crest Friday at Red River Landing, Louisiana, a day after claiming the life of a 69-year-old Mississippi man.

Resignations at Japanese utility company: Tokyo Electric Power Co. President Masataka Shimizu has announced his resignation, and Managing Director Toshio Nishizawa has been tapped to replace him. Tokyo Electric is the parent company of the nuclear plants damaged by the March 11 earthquake and tsunami, leading to radiation release and evacuations. The company reported a net loss of more than $15 billion Friday.

The board of directors must still approve Shimizu's resignation at a June meeting. Vice Presidents Sakae Mutoh and Makio Fujiwara also tendered their resignations.

No Schwarzenegger comic book: Comic book creator Stan Lee's company announced it would stop plans to produce "The Governator," a children's comic book and TV show based on former California Gov. Arnold Schwarzenegger's life. "In light of recent events, A Squared Entertainment, POW, Stan Lee Comics, and Archie Comics have halted production," the statement said. The statement was a revision from an earlier one that said the companies "have chosen to not go forward with the 'Governator' project."