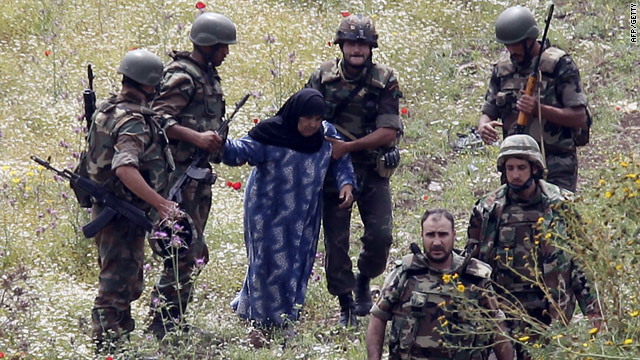 Syrian soldiers prepare to hand over an elderly Syrian woman who was caught trying to cross the border into northern Lebanon.
May 20th, 2011
03:10 PM ET

[Updated at 3:10 p.m.] Anti-government demonstrations broke out Friday in Syria after weekly Muslim prayers, with activists reporting at least 34 deaths amid clashes between security forces and protesters.

The Syria Human Rights Information Link told CNN that at least 11 people died in the western industrial city of Homs when security forces fired at crowds.

For two months, Syria has been torn by street protests against political repression and a fierce security crackdown against demonstrators. The government's tough and violent actions toward marchers and its thousands of mass arrests have drawn widespread criticism.

Demonstrations erupted after Friday prayers in Syrian cities, as they have for weeks.

The United States has imposed sanctions on Syrian President Bashar al-Assad and other senior officials. On Thursday, President Barack Obama singled out Syria for criticism during his speech on the Middle East.

A rights activist in Homs described thick black smoke hanging over the city as thousands of demonstrators took to the streets demanding al-Assad's ouster.

According to the rights activist, the demonstrators gathered from several neighborhoods around Homs.

The demonstrators chanted slogans calling for the release of political detainees and demanded freedom, equality and fundamental reforms, the activist said. As the crowd grew, security forces fired shots in the air and tried to disperse the gathering.

9:30 am ET October 24, 2021 RETWEET
Throughout the weekend and into next week, parts of the West Coast will go from extreme drought to facing a seriesâ€twitter.com/i/web/status/1â€¦Fo
CNNweather

9:15 am ET October 24, 2021 RETWEET
For the first time, a pig kidney has been transplanted into a human without triggering immediate rejection by the râ€twitter.com/i/web/status/1â€¦4W
cnni