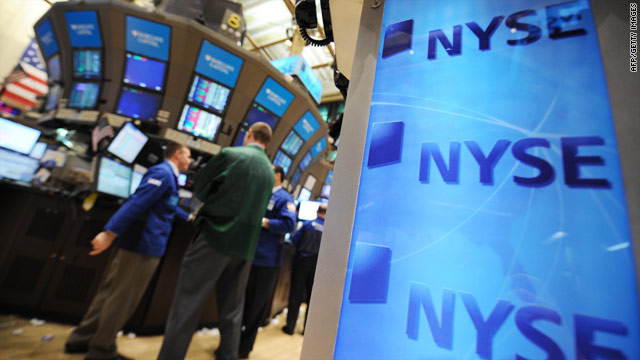 U.S. stocks finished lower Friday, amid weak outlooks from retailers and as the dollar rallied on Greek debt jitters.
The Dow Jones industrial average dropped 93 points, or 0.7%. Earlier in the session, the blue-chip index slumped more than 100 points. The S&P 500 shed 10 points, or 0.8%, and the Nasdaq Composite lost 20 points, or 0.7%.

Gap shares tumbled 17.5% while Aeropostale's stock fell 14% after both companies lowered their full-year guidance, citing weaker demand and higher commodity costs. Gap shares were the worst performer on the S&P 500. Other retailers followed suit, with shares of Macy's, Urban Outfitters and Abercrombie & Fitch all sliding more than 2%. Shares of Polo Ralph Lauren and JC Penney fell more than 4%.

"When you see these retailers give numbers like this, you get concerned that the consumer is starting to give up some ground, with high oil prices and all," said Anthony Conroy, head trader at BNY ConvergEX.

Treasury prices were little changed Friday, as investors sat on their hands ahead of a barrage of economic data coming next week.

The data dump will start Tuesday with a report on new home sales, and will be followed later in the week by data on initial unemployment claims, durable goods, GDP, personal income and spending, inflation and pending home sales.

"Today it is likely to be a quiet one," Kevin Giddis, executive managing director at Morgan Keegan, wrote in a note to clients. "There are no economic numbers to be released and most traders seem to be comfortable sitting on the sidelines waiting for next week's supply."