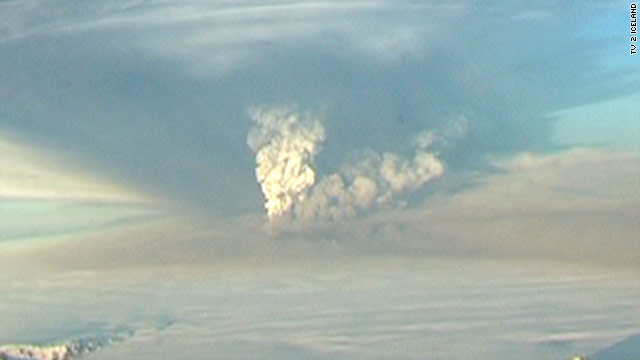 The Grimsvotn volcano under the Vatnajokull glacier in Iceland was erupting Saturday, according to the Icelandic Meteorological Office.

A dark cloud of smoke was rising from the glacier, and scientists were flying over the scene to evaluate the event, according to CNN affiliate TV2 Iceland.

The last eruption of the volcano was in 2004, TV2 Iceland reported.

Sitrun Kapitola, manager of the Islandia Hotel Nupar, which is close to Saturday's eruption, said she could see a cloud of smoke over the mountains, and ash was falling around the hotel.

Police were telling her and others that there was no need to evacuate and there was nothing to fear, Kapitola said.

"It's nothing compared to the other one," she added, referring to last year's dramatic eruption of the Eyjafjallajokull.

Tourists at the hotel were excited to see the eruption, watching the events unfold while eating dinner, she said.

"It happens every 10 years," she said. "It mostly produces water."

Grimsvotn is Iceland's most frequently active volcano. In 1783, a 16.7-mile fissure system from the volcano produced the world's largest known historical lava flow over a seven-month period, damaging crops and livestock, according to the Smithsonian National Museum of Natural History. A resulting famine resulted in the loss of one-fifth of Iceland's population, according to the Smithsonian website.

The eruption is small, an eyewitness at a hotel within eye shot of the volcano told CNN.  "It's nothing compared to the other one," said hotel manager Sitrun Kapitola, referring to the Eyjafjallajkull volcano, which erupted in 2010 and stopped air traffic in Europe.

Grímsvötn is located in Vatnajökull Glacier, which is the largest ice cap in Europe. Geologists have been expecting an eruption after monitoring seismic activity for some time.

While a plume of ash is visible from a distance, it is still too early to tell how big of an eruption it will be, reports Ice News, quoting Icelandic police.

The Grímsvötn volcano last erupted in 2004.

Iceland has experienced several earthquakes within the past 48 hours. Authorities are watching for a quake-driven flash flood, called a joklahlaup.