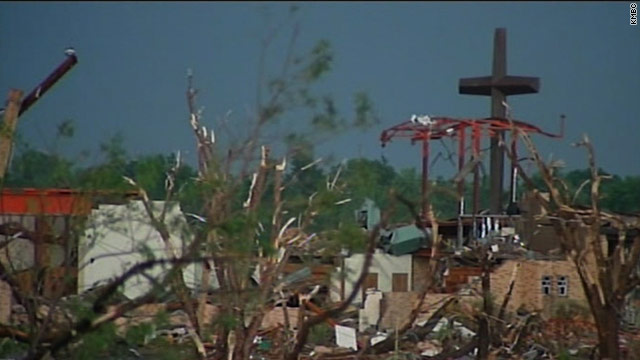 A cross rises above the rubble after a deadly tornado struck Sunday evening in Joplin, Missouri.
May 23rd, 2011
08:26 AM ET

On the Radar: Missouri tornado, Obama's visit to Ireland, Pawlenty in, Oprah out

Tornado devastates Missouri city: A tornado killed at least 89 people and destroyed as much as 20% of Joplin, Missouri, on Sunday evening. The twister cut a path through the central city and struck one of its hospitals.

Louisiana inmates brace for flooding: Prisoners in southeastern Louisiana are helping to fill sandbags and patch up levee holes along the swollen Mississippi in an all-hands effort to keep the mighty river at bay.

At the Louisiana State Penitentiary, also known as Angola, parts of the sprawling prison complex are already underwater, and some 2,000 inmates have been evacuated. But about 2,500 inmates are still at the prison, working to fill holes and keep the grounds dry.

Along with several other states, Louisiana is struggling to cope with the worst flood to hit the lower Mississippi River Valley since at least 1937.

O'bama traces roots in Ireland: President Barack Obama is paying a visit to Ireland, including the village of Moneygall, hometown of Obama's great-great-great-grandfather on his mother's side.

The president and first lady Michelle Obama are on their way to the Group of Eight summit starting Thursday in Deauville, France.

Pawlenty scooped himself by releasing a video on his website Sunday in which he declared, "I'm Tim Pawlenty and I'm running for president of the United States."

Iceland volcano disrupts air travel: Iceland hopes its main international airport will reopen to air traffic Monday following a volcanic eruption in the country over the weekend, a spokeswoman said.

There were no international flights in or out of the country Sunday after Europe's most active volcano, Grimsvotn, began to erupt Saturday.

Last year, transatlantic and European air traffic was snarled for weeks by an ash cloud from another Icelandic volcano, Eyjafjallajokull.

This is the end for Oprah: It's farewell week for talk-show queen Oprah Winfrey, whose groundbreaking 25-year run is coming to an end.

And while Winfrey has paid tribute to teachers, philanthropists and people from all walks of life on her show, the surprise spectactular was clearly a tribute to her legacy.