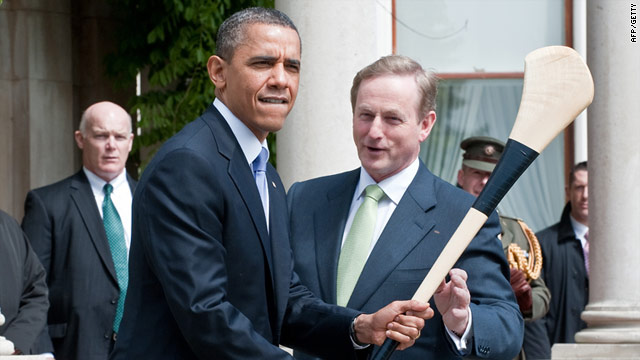 Sipping a pint of Guinness and receiving an almost royal welcome, President Barack Obama made a big splash in Ireland. CNN.com readers debated Obama's motives for the trip, whether the festivities were appropriate after the tornado in Joplin, Missouri, and discussed the proper drinking of stout beers.¬ÝThey also made plenty of "O'Bama" jokes.

"Sure and President Barry O'Bama¬Ýis in the Ould Sod where his great-great-great-grandfather came from! All joking aside, at the time of President Obama's ancestor's arrival in the States, there was almost as much prejudice against the Irish as there was against blacks. The fact that the Irish were able to integrate into society following the Germans and Dutch, and preceding the Italians and Slavs, bode well for our country. Those peoples did have a major advantage in their skin color – something that was not available to help the blacks, Asians and Native Americans. That Barak Obama – a mixed-race individual – won our presidency shows how far America has come in the last 150 years." - Firebaron

Readers in Ireland also weighed in. sw61 said, "As an Irish person watching Obama on TV right now, have to say he comes across as a great guy. He and his wife are walking the full length of the street of a very small town in the middle of Ireland (population 300) and shaking the hand of everybody there. As a country, we've been in the news for all the wrong reasons of late, and it's just so nice that, for once, there's a spotlight on us for a good reason. The queen was here last week, and this visit is a huge contrast to that. It's been a good few days for our small country and we are just delighted to see them both here ... though the weather is unfortunate (!). Right now, the ordinary people of Ireland need all the help they can get and it's a nice change from the usual dose of doom and gloom that we get fed by our media."

Vesi wrote, "A lot of jealous and envious people posting here. I have lived in Ireland for several years (Limerick). I can tell you without doubt that most if not all of the self-called Irish-Americans are no more and no less Irish than Obama. So give the guy the same break that you give to the millions of so-called Irish-Americans."

But chanteur said, "Watching Obama sip beer while hundreds in Missouri are dead with thousands more homeless and without help makes me very angry. Where is our leader when we need him most? He's out having another Guinness."

He got more criticism about his policies. qev wrote, "The fact that Mr. Obama gets more 'love' in a small Irish town than he does in small-town America speaks volumes."

capnhindsite said, "I'd drink a pint with Obama ... then again I'd drink one with Bush also. Not particular when it comes to beer."

We did hear from passionate Guinness drinkers. rdesmith89¬Ýwrote, "One should not sip Guinness. He should down it in one gulp. That is the only politically correct way to drink Irish stout." cthulhubbq replied, "Seven drinks for a pint is the proper pace. Should be seven distinct foam rings in the glass once you've finished." MDGAmerican concurred: "Agreed, it's actually hard to stop once your lips hit the glass. Seriously though ... . I do it typically in two gulps, but that second one is a small one."

To smoke in public or not, that is the question. Opinions were as heated as the glowing end of a lit cigarette as readers responded to a story about an outdoor citywide smoking ban for New York beginning Monday.

The most-liked comment came from ctrlz, who wrote, "Smoker or nonsmoker, loss of personal freedoms is never positive." But Rethink responded, "Which is why it is such a positive thing that people in New York City are now more free to breathe without intrusion. An increase in freedom."

Some said prohibiting outdoor smoking is going too far.¬ÝJWTeacher wrote, "I think smoking is a disgusting habit. Having said that, this is terrible. If you want to smoke, it's your right. I can understand indoors, but outside is just ridiculous!" And YouPeopleSuk "Banning smoking outside? Oh yea that makes sense, because breathing in all those fumes from the cars, taxis, buses, trucks is so much better for you."

Other readers were thrilled about the idea. themikester¬Ýsaid, "Good for them! Don't stop until smoking is completely banned! Nonsmokers are harassed by smokers every day. If someone were firing a noxious cloud of participates at you every day while you're simply trying to enter your place of work, or walk down the street with your child, you'd be upset too. Don't whine to me about your rights. I give a damn about your rights when you violate my right to not have to breathe your toxic deal every day."

Finally, CalgarySandy¬Ýrecalled, "It used to amuse me when someone in my vicinity started waving their hands to drive off the smoke from my ciggie on the streets. They did this even when the smoke came nowhere near them. I kept my distance due to politeness. I have since quit smoking. The thing that struck me funny was that the streets are packed with cars and many diesel trucks."

F0st3rs¬Ýsaid, "You know it really is a wonderful thing she has done. To raise money for kids she was willing to put her self-esteem¬Ýaside by dressing up like a highfalutin raccoon and bring attention to that gawd-awful hat. But it really is for a good cause. Have fun, but admire her too."

toutry¬Ýwrote, "Philip Treacy should be shot. Or even worse - wear this hat the rest of his life."

kimily¬Ýsaid, "Obviously someone has more money than they know what to do with. I'd rather just give the money, and let them keep the hat. This looks like something out of Whoville!"

TGD783 opined, "It looks like a toilet seat with a ribbon on it. Lady Gaga wouldn't wear that piece of garbage."

Some comments edited for length and clarity.

Mubarak was a strongman president who led the Arab world‚Äôs most populous country with an iron fist. He was deposedtwitter.com/i/web/status/1‚Ä¶aRGZ
cnni

6:27 am ET February 25, 2020 RETWEET
BREAKING NEWS: Former Egyptian President Hosni Mubarak, who ruled Egypt for 30 years before he was overthrown in a‚Ätwitter.com/i/web/status/1‚Ä¶tY
cnni

6:21 am ET February 25, 2020 RETWEET
China has spent decades nurturing its tech sector. Now it's hoping that innovations like drones, robots and superco‚Ätwitter.com/i/web/status/1‚Ä¶Mh
cnni

6:03 am ET February 25, 2020 RETWEET
The UK Department of Health has released a new advisory saying that travelers returning from Northern Italy should‚Ätwitter.com/i/web/status/1‚Ä¶Y2
cnni