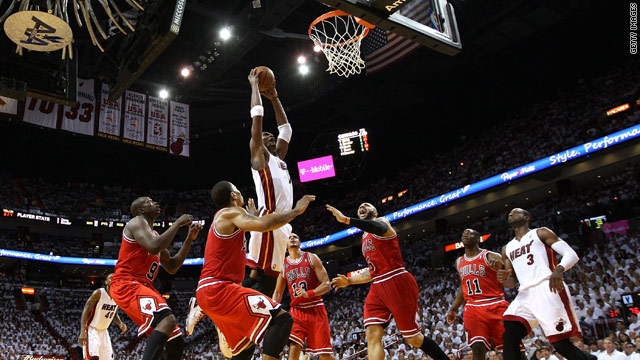 SI.com: Bosh proves his worth

If Sunday night was any indication of what the Bulls have to contend with for the remainder of the Eastern Conference finals, now may be a good time to start worrying.

Chris Bosh put up an impressive 34 points in Miami's 96-85 win over the Bulls and showed he has much more to offer than just his strength on defense. As SI.com's Ian Thomsen explains, Bosh not only delivered Miami a 2-1 lead in their series against the Bulls, but answered critics who dismissed him as the least of The Big Three.

"The truth is that Bosh - unlike Wade and James - had never played beyond the first round before this year, and he has been adapting to the demands of a title contender," Thomsen writes. "His play in this game was another sign of a player finding his way and adapting to the moment, and his teammates know they could not hope to win a championship without him."

But more than just Bosh's big numbers, the Heat also found their stride in limiting Derrick Rose. The MVP point guard eked out 20 points and committed five turnovers in just 39 minutes, much to the credit of the Heat's defensive prowess.

But don't think the Bulls are going to make the rest of this series easy for Miami. Though the Heat have a perfect home record working in their favor for Tuesday night's Game 4, the Bulls will certainly try to even things up and capitalize on what has undoubtedly been their strength this series: their defense.

Dallas Mavericks vs. Oklahoma City Thunder (9 p.m. ET) - The Thunder will look to tie their Western Conference showdown with the Mavericks tonight in Oklahoma City.

26 - Place at which Danica Patrick qualified during this weekend's Indy 500 qualifiers. She clocked in with a four-lap qualifying average of 224.861 mph. Bruce Martin talks Danica's Bump Day on SI.com.

13 - Number of career victories golfer David Tom has amassed. He broke more than a five-year winless streak with his breakthrough at Colonial.

The Ralph Lauren Corporation is cutting ties with golfer Justin Thomas over his use of a homophobic slur. Thomas hâ€twitter.com/i/web/status/1â€¦vr
cnni