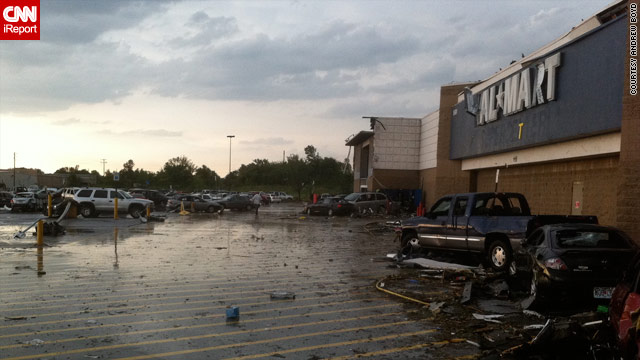 Tussiona Mikell debated taking shelter at this Walmart -- but instead chose to stay hunkered down at the Dollar Tree.
May 23rd, 2011
02:36 PM ET

Tussiona Mikell was at the cashier's register inside a Dollar Tree in Joplin, Missouri, when a friend called her to tell her a storm was approaching. Mikell lives 12 miles from Joplin, in Neosho, Missouri, and was in town just to get a few items.

Then, the sirens started blaring.

The alerts were saying a tornado was headed straight down the street. Mikell took a split-second to make a decision. At first, she was going to head to the Walmart nearby, but she was afraid she might get caught trying to make it.

The Dollar Tree cashier said "Well, we have a freezer here, we normally go into the cooler when something like this happens," Mikell told CNN. "They were telling everyone, 'Get to the back, get to the back.' We rushed into the coolers and we could just hear everything on the outside, but we couldn't see what was happening."

"We could just hear things caving in but we couldn't see what was going on," she told CNN. "There was a lot of calling on Jesus. People were crying, saying different things. I was calling out 'Jesus, Jesus, Jesus.' "

"Everything else around was destroyed," she said. "We were hollering, 'Help, help, we're stuck.' "

Two people helped pry open the freezer and Mikell and the others were able to make their way out of the shelter.

The parking lot was littered with overturned cars and rubble. The exterior was damaged and according to witnesses, the damage was massive, Mikell said.

"How blessed I was not to even go over there," she said. "It was a disaster over at Walmart. When I think about the quick choice I made, it makes me shake."

Despite being a little sore and achy from being cramped into the partially collapsed store freezer, Mikell is profoundly thankful that she was able to even speak with CNN Monday.

The plant was last documented in Vermont in 1902. cnn.it/3uktZI4
cnni

The plant was last documented in Vermont in 1902. cnn.it/3uktZI4
cnni