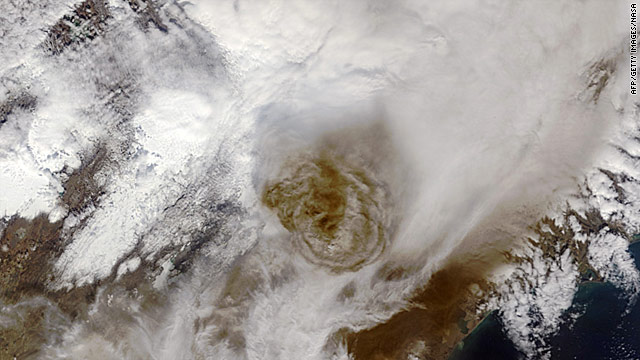 Ash billows from the Grimsvotn volcano in Iceland on Tuesday in an image from a NASA satellite.
May 24th, 2011
05:45 AM ET

Concentration of ash is expected to be low and it's not yet clear if Heathrow flights will be canceled.

The ash cloud is forecast to cover all of British airspace by 1 a.m. Wednesday morning, Britain's weather agency, the Met Office, said Tuesday.

Ash will be densest over Scotland, Northern Ireland and northern England, the Met Office said. Heathrow is in the south.

Joplin tornado: As residents in hard-hit Joplin, Missouri, try to recover from one of the deadliest U.S. tornadoes on record, the National Weather Service warns the danger might not be over.

The weather service warns there was a 45% chance of another tornado outbreak – with the peak time between 4 p.m. and midnight Tuesday – over a wide swath, including parts of Texas, Oklahoma, Arkansas, Nebraska and Missouri, including Joplin.

Netanyahu speech:Israeli Prime Minister Benjamin Netanyahu will lay out his vision of a settlement with the Palestinians in a speech to Congress Tuesday morning.

His speech follows an appearance Monday night where he told the main U.S. Jewish lobby that the Israeli-Palestinian conflict persists because the Palestinians "refuse to end it."

In his remarks to the American Israel Public Affairs Committee, Netanyahu said Israel wants peace, "because we know the pain of terror and we know the agony of war."

But, he added, "this conflict has raged for a nearly a century because the Palestinians refuse to end it. They refuse to accept the Jewish state."

He also repeated his argument that Israel's pre-1967 borders were "indefensible."