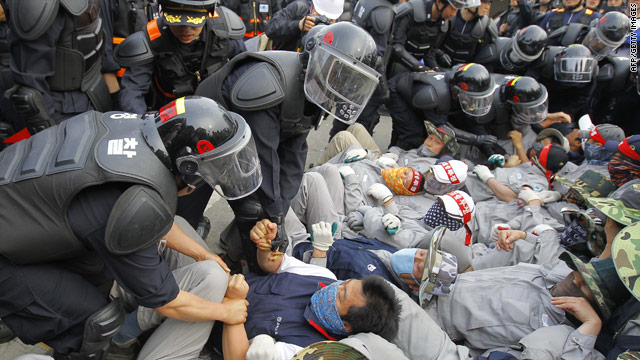 Riot police backed by helicopters and water cannons broke up a sit-down strike by union workers Tuesday at an auto parts plant in South Korea, media there reported.

The strike at the Yoosung Enterprise factory in Asan threatens to cripple production at Hyundai, Kia, GM and Renault plants in South Korea, The Korea Times reported.

Hyundai and Kia get 70% of their engine components from Yoosung, according to the Korea Times.

Hyundai, Korea's largest automaker, already has suspended production of the Tucson ix sport utility vehicle, and its subsidiary Kia has idled a line that makes the Carnival minivan, the Korea Times reported.

The company locked out workers after wage negotiations broke down after 11 rounds, Yonhap News Agency reported. About 500 strikers then entered and occupied the plant until the police moved in Tuesday; no violence was reported.

"Although the management closed the factory, the union leaders mobilized union members to illegally occupy the factory and barred other employees from entering their offices," an official at the Asan police station told Yonhap.

The Korea Confederation of Trade Unions condemned the police raid.

"Law enforcement authorities refused to follow law and order by sending riot police into the plant," the statement said. "... We will fight along with unionized workers of Yoosung Enterprise to the end until we achieve our goals."

The labor group said it will work to force South Korean President Lee Myung-bak to step down.