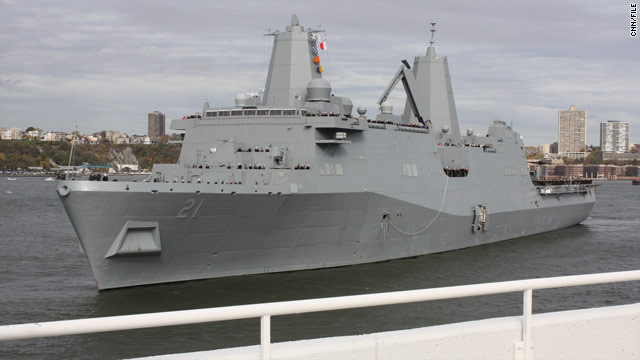 Fleet Week: New York's City annual salute to the nation's military begins Wednesday. Thousands of military personnel will be in the Big Apple for the Fleet Week event, which was first held in 1984.

Highlighting this year's event will be a visit by the USS New York. The amphibious transport ship, which was constructed with 7 1/2 tons of steel salvaged from the wreckage of the World Trade Center destroyed in the September 2001 terrorist attacks, returns to New York City for the first time since being commissioned there on November 7, 2009.

The ship will be open for public visits during Fleet Week, which concludes June 1.

Obama address: President Barack Obama will address both houses of the British Parliament on Wednesday.

Ben Rhodes, the deputy national security advisor for strategic communications, told reporters on Tuesday that Obama would reaffirm that the U.S.-British alliance and NATO are "the cornerstone of global security and the extension of the democratic values that we share."

"The United States and the United Kingdom, along with our allies, are the ones who shoulder particular burdens for global security," Rhodes said. "We see that in Afghanistan. We see that in our efforts against al Qaeda. We see that of course today in Libya."

CNN television coverage begins at 10 a.m. ET. The president’s speech will be live-streamed on CNN.com and on the CNN Apps for iPhone, iPad and Android.  CNNPolitics.com will feature in-depth reporting on what to expect and The Political Ticker will incorporate live blogging during the speech.

The weather pattern that brought Tuesday's tornado outbreak in the Plains is moving into those states Wednesday, forecasters said.

"Conditions will once again be favorable for the development of long-lived rotating thunderstorms that could produce strong, fast-moving tornadoes," the weather service said.