Joseph Biggs, a leader of the Proud Boys extremist group that took part in the US Capitol insurrection, was taken i‚Ätwitter.com/i/web/status/1‚Ä¶Yi 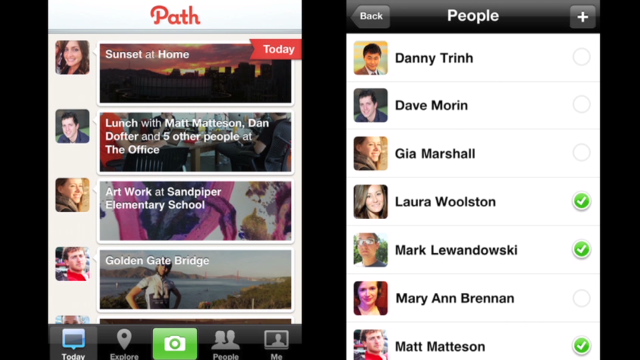 Overheard on CNN.com: Are we really friends?

"I find it convenient that I'm friends with my ex-girlfriend's former boyfriend's brother's aunt's uncle's husband whom I have never met."¬Ý‚ÄìEnts

Ex-Facebook employee Dave Morin has developed a new mobile personal network called Path that limits users' friends to 50. He says digi-friend overload led him to create an app-based social network with the goal of promoting intimate and memorable sharing.

DTakes said, ‚ÄúNo one says you need to have 130 friends or more. I limit my friends to people I actually know I'm going to keep in touch with. I politely decline the rest of them.‚Äù HJCihak said, ‚ÄúThis whole Facebook ‚Äòfriends‚Äô concept is ridiculous. A real friend is someone who'll help you move. Anyone else is just a person taking up valuable space in your life.‚Äù MDMick said, ‚ÄúWhat constitutes a friend? I've run into old friends from high school or college and we pick right back up as if no time had passed. So are they still friends? In many cases, if I or they were in trouble I know the other would help.‚Äù indy1337 said, ‚ÄúI don't have friends. Only people I stalk.‚Äù

zoaster said, ‚ÄúGotta love the ‚ÄòFriend Collectors‚Äô on Facebook; let‚Äôs see how many people I can collect in my little page of self-esteem.‚Äù laserfloyd¬Ýsaid, ‚ÄúI only interact with about 5-10 of the 150-ish¬Ýfriends I have on Facebook. Most are high school classmates. A few are friends of friends. A couple are honestly people who I can't recall ever knowing but I was feeling nice.‚Äù NZ47 said, ‚ÄúI have 55 FB friends, all I know personally. All my profiles/pics are private; even friends of friends cannot see them. If you really want, you can do it all with one social media. Why bother creating a new one and spending more time trying to manage it. People already spend enough time on these social media things, we don't need another!‚Äù NorthGal34¬Ýsaid, ‚ÄúAt first I had 430 or so people on FB. Then, after a few months, I edited down to the 40 people I talk to on a regular or semi-regular basis. Easy-peasy!‚Äù

Crawler said, ‚ÄúIsn't this why we have Facebook, to manage more than 50 friends?" SerenianSing replied, ‚ÄúI seriously doubt you have 50 real friends. Those you have are acquaintances.‚Äù Iskrenie said, ‚ÄúMy friends are in my cell phone contacts..."

HyruleKing¬Ýsaid, ‚ÄúFB just creates the illusion that friends are easy to make, but it's not. Then you have those people who love FB'ing all day long, addicted to it and wouldn't want anything to happen to their little world. The point is: FB can be a powerful tool if used correctly, otherwise it‚Äôs just a website with people photos to look at.‚Äù

And readers commented on the concept of Path itself:

Guest said, ‚ÄúI love the idea. Even though you can set privileges through friends list and you decide whom to share with, I feel a little panic when I share something really personal.‚Äù eMoney003 said, ‚ÄúGive me a break. FB and other networks allow options for setting up groups. Utilize those options or only accept requests from your friends and family. Unless of course you prefer having restrictions and limitations in your life, then by all means join something like Path.‚Äù saria said, ‚ÄúThe problem with this concept is you may have 50 friends, but in reality, you may only have 10 friends who are actually active in FB and using it. We all know if only 10 friends are posting on FB. That makes for a very boring FB experience.‚Äù njsokalski said, ‚ÄúI like the idea of restricting the number of friends, it does encourage the idea of not saying everything to everyone, but social networking is still not a good or worthwhile thing. If somebody is really your friend, you shouldn't need any extra website or app to help you stay in touch.‚Äù

The first-degree murder trial for Casey Anthony - accused of killing her 2-year-old daughter, Caylee, in 2008 - began Tuesday with her defense team alleging that Caylee¬Ýwasn't killed, but had drowned in her grandparents' pool, and that Casey was the victim of sexual abuse by her father. Wednesday, her then-boyfriend's¬Ýroommates testified that during the time that Casey lived with them - for the month that Caylee was missing before police were notified - Casey told them her daughter was with her nanny.

People who commented on CNN.com said they see problems with the defense and strongly doubt Casey‚Äôs innocence.

antezinzin said, ‚ÄúWhy the tape if the little girl were already dead? As far as her father sexually abusing her I don't believe one word of that. If it is true, how does that excuse her behavior and the lies about the babysitters?‚Äù Alyssa0411 said, ‚ÄúExplain the duct tape over the mouth, Baez. A child that ACCIDENTALLY drowns doesn't get tape put over their mouth before being dumped in the forest.‚Äù celh¬Ýsaid, ‚ÄúWhy did she sit on the phone at the jail and tell them they had been wonderful parents and grandparents? This reminds me of the kind of excuses very small children make up. When one isn't working they try another. It's just mind-boggling that her attorney came up with one that sounds as absurd right out of the gate!‚Äù dizzylucy said, ‚ÄúI agree, there are way too many holes in her story for it to be true. Even if she was abused, that's tragic, but no excuse for killing her own child or even, as they're suggesting and I don't believe for a second, covering up an ‚Äòaccident.‚Äô She seems like a sociopath who wanted her partying life back. So sad.‚Äù

lanhub¬Ýsaid, ‚ÄúIt's pretty clear from the story about various testimonies that this woman is known for telling lies (she told roommates that her daughter was with a nanny...now she's saying that she had drowned in the pool) so I wouldn't hold it beneath her to lie about her abuse in order to draw attention away from herself and lessen her sentence. The defense is also accusing the meter reader who found Caylee's body that he was the one who had moved the body (from yesterday's CNN story about the case). The defense is desperate.‚Äù

Another step into deep space for NASA

While the final space shuttle launch is slated to happen on July 8, don't count NASA out on the innovation of space travel. Administrators announced Tuesday that they have plans for a return to yesteryear by developing a space capsule that will carry humans into deep space. The new craft won't be ready until 2016 at the earliest, but it could go to the moon or Mars.

The announcement excited some CNN.com readers:

beverlytat said, "How cool is this? I love NASA and their amazing science programs that lead to greater innovations and world leadership in technology. How exciting. Go NASA! I grew up watching the Apollo missions and this is another great era for NASA."¬Ýraiders12 said, "As an engineer I appreciate the sciences. Keep it up NASA, despite the federal govt rooting against you, I am all for scientific advancement."¬ÝKurj said, "That's the best news I've heard in a long time. Allowing the U.S. to lose its lead in space would be a crime and a tragedy."¬ÝDiana34 said, "Instead of sending all this money to people in other countries who hate us and want to kill us, how about taking all that and give it to NASA and maybe in a few years not decades we can go to Mars and start learning more about this fantastic place we all live in called the universe."

Landscape architect Phil Dunn has taken on an ambitious challenge. For one year, he is basing his diet on food grow‚Ätwitter.com/i/web/status/1‚Ä¶gW
cnni

11:12 pm ET January 20, 2021 RETWEET
Video from past inaugurations shows just how different President Joe Biden's inauguration was, but also how some mo‚Ätwitter.com/i/web/status/1‚Ä¶On
cnni

10:58 pm ET January 20, 2021 RETWEET
RT @MittRomney: Today‚Äô#InaugurationDayay occurs at a difficult time for our nation. I pray that President Biden will call upon our better a‚Ä¶
susancandiotti