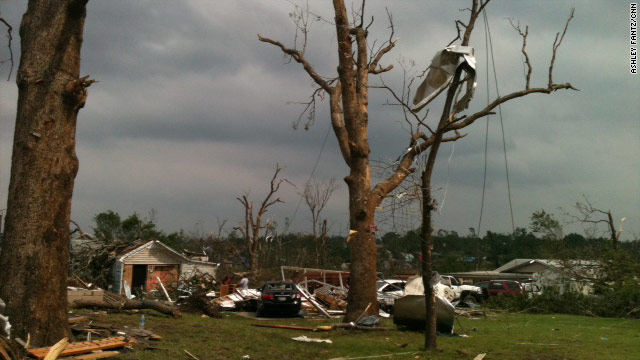 "You know it's funny girl, I used to love to watch these," he said. "But this one was so black. It was not what I wanted to see."

His voice trailed off. He looked around.

Everything he had ever owned was no more. The only recognizable thing left of the home he had lived in his entire life was the skeleton of a fireplace - a dozen bricks.

He looked at me again.

"They always came and went," he said.

He didn't know this storm would be any different.

I didn't know what else to say to him, so we just stood there together for a minute. I told him my name. I said that I had grown up with the sirens and I used to think the storms were beautiful too.

He, meanwhile, tugged on his red suspenders trying to keep himself from crying in front of me, a young woman - a stranger.

Then he put his hands on my arm and said, "That's enough, girl."

There was nothing else to say.