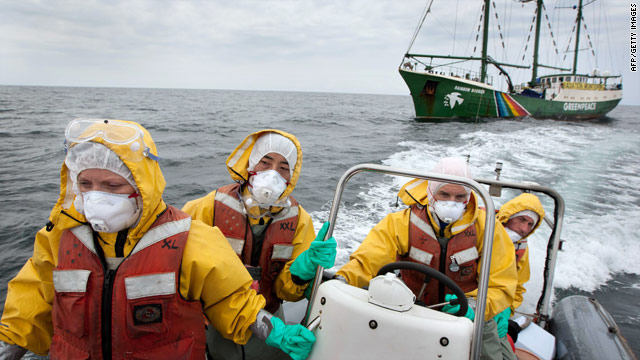 A Greenpeace crew tests waters off Japan for radiation contamination earlier this month.
May 26th, 2011
08:31 AM ET

The environmental group said its findings run counter to Japanese government reports that radiation from the Fukushima plant, damaged in the March 11 earthquake and tsunami, is being diluted as time passes.

“Despite what the authorities are claiming, radioactive hazards are not decreasing through dilution or dispersion of materials, but the radioactivity is instead accumulating in marine life," Greenpeace radiation expert Jan Vande Putte said in a press release.

Greenpeace said its teams collected samples of marine life along the Fukushima coast and in international waters outside Japan's 12-mile territorial limit. The samples were tested by nuclear research laboratories in France and Belgium, and high levels of radioactive iodine and cesium were found, it said.

Fish, shellfish and seaweed all showed significant levels of radioactive contamination, according to Greenpeace. All are widely consumed in Japan.

Besides consumers, fishermen are at risk from the elevated radiation levels, Greenpeace said.

“Ongoing contamination from the Fukushima crisis means fishermen could be at additional risk from handling fishing nets that have come in contact with radioactive sediment, hemp materials such as rope, which absorb radioactive materials, and as our research shows, radioactivity in fish and seaweed collected along Fukushima’s coast,” Wakao Hanaoka, Greenpeace's Japan oceans campaigner, said in the statement.

Officials from Tokyo Electric Power Co., which owns the Fukushima plant, said last week they expected an end to the nuclear crisis by January. But utility officials said this week that two of  the reactors at the Fukushima plant may be riddled with holes, which would hamper plans to cool the units and bring the crisis to an end.

While no deaths have been attributed to the Fukushima Daiichi accident, the earthquake and tsunami have killed nearly 15,000 and left 10,000 more missing, Japan's National Police Agency has reported.