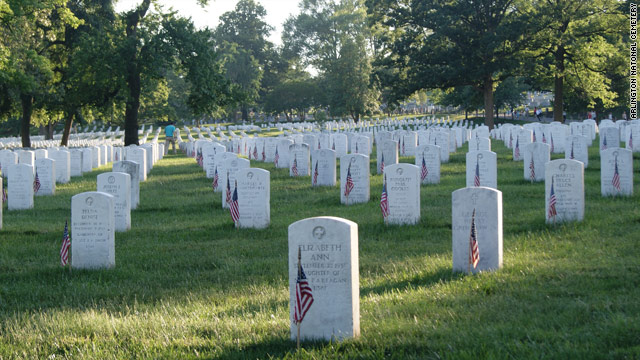 Flags-in: The soldiers of the 3rd U.S. Infantry (The Old Guard) will be placing flags before each of the gravestones and niches in Arlington National Cemetery and the U.S. Soldier's and Airmen's Home National Cemetery.

Every available soldier in the unit will participate, placing the small flags one foot in front of each of the more than 280,000 gravestones and niches of service members laid to rest in the two cemeteries.

The event is known as "flags-in" and it has been observed before Memorial Day weekend each year since 1948. The 3rd Infantry soldiers will remain in the cemeteries throughout the weekend to be sure the flags are undisturbed.

NBA playoffs: The Miami Heat can wrap up the NBA's Eastern Conference Finals on Thursday night with a win against the Chicago Bulls.

The Heat lead the best-of-seven series 3-1 and one more win will put superstar LeBron James into his second NBA Finals and his first since leaving the Cleveland Cavaliers for the Heat last summer.

In winning games two, three and four of the series, the Heat have handed the Bulls their first three-game losing streak of the season. Read SI's Ian Thomsen's take on the Heat's victory on Tuesday.

The top-seeded Bulls will now have to win three in a row to make the Finals.

The Eastern Conference winner faces the Dallas Mavericks, who finished off the Oklahoma City Thunder in the Western Conference Finals on Wednesday, winning 100-96 to take that series 4-1. Read SI's Chris Mannix's take on that result.

The Army Corps of Engineers announced Wednesday that it had closed three of the 17 open bays at the Morganza Spillway, which was opened May 14 to prevent the Mississippi from flooding New Orleans and Baton Rouge. The Corps said much as 1.2 million gallons (172,000 cubic feet) per second had been pouring through the spillway, which diverted water through the Atchafalaya River basin to the Gulf of Mexico west of New Orleans.

The resulting high water has caused some flooding down the Atchafalaya. But the water levels "continue to be lower than anticipated" throughout the basin, Corps spokesman Ken Holder said in a statement announcing the decision.