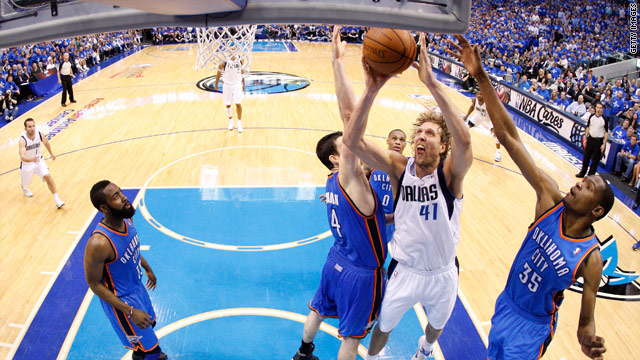 Dallas' Dirk Nowitzki takes it to the hole Wednesday with four Thunder players in the lane. Nowitzki finished with 26 points.
May 26th, 2011
01:35 PM ET

Led by Shawn Marion and Dirk Nowitzki, the Mavericks sealed the deal and sent the Thunder packing Wednesday night with a 100-96 win in Game 5 of the Western Conference Finals. Though Oklahoma City won't get a shot at the title, it certainly didn't go down without a fight. As SI.com's Chris Mannix explains, the Thunder fought to a three-point lead going into halftime but ultimately were outmatched by a better, more experienced Dallas squad.

"Oklahoma City will learn from this experience," Mannix writes. "(Kevin) Durant will learn how to play through contact, how to not let players push him off his spot. (Kendrick) Perkins will shed 15 pounds and regain the mobility he lost dealing with multiple knee injuries. Serge Ibaka will take the lessons learned from defending Nowitzki, and Zach Randolph in the conference semis, and come back in the fall a better player. (James) Harden will be a year older, a year wiser and that syrupy shooting stroke of his isn't going anywhere."

Russell Westbrook will also have the opportunity to grow after receiving the most criticism for his lackluster performance during the playoffs, according to Mannix. Westbrook's youth and inexperience worked against him throughout the conference finals, but with time he could be an asset to the Thunder, Mannix writes.

Chicago Bulls vs. Miami Heat (8:30 ET) - It's do or die for the Chicago Bulls. Trailing the Heat 3-1 in the Eastern Conference Finals, the Bulls will need a win at home Thursday night to keep their championship hopes alive.

19 - Number of innings played between the Reds and Phillies on Wednesday night/Thursday morning. Ultimately, the Phillies edged out Cincinnati 5-4.

114 - Seed of the Netherlands' Arantxa Rus, who stunned second-seeded Kim Clijsters on Thursday in the French Open.