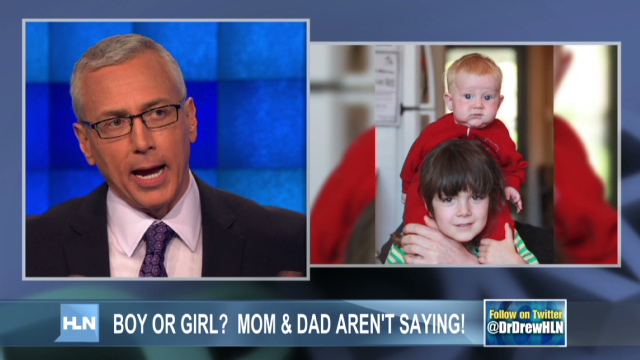 “This child will know what it's like to have a completely free set of gender beliefs. These parents should be commended, not criticized.”– greeniethumb

“Dear Mom and Dad,
Thanks for not acknowledging gender. Now I'm screwed up, all because you wanted to use me as a political statement. I appreciate your selfishness.
Love, Storm”– MrjackTors

Boy or a girl? It's a secret - and an international controversy

A Canadian couple with two boys, 5 and 2, have decided that the gender of their third child will remain a mystery for now. Even the grandparents don't know whether Storm, who is 4 months old, is a boy or a girl. Some CNN.com readers thought the experience would damage the baby's psyche; others applauded. Either way, the story has caused an, ahem, storm of controversy.

iphelgix said, “We're supposed to prepare our children to make their own way in this world. I do not know if this approach is right or wrong, but as a parent that means it's not an approach I'd be willing to test out on my own kids just to see if it helps.”

HeatherJeane said, “This experiment was conducted forty or so years ago to disastrous results on a set of identical twin boys. One was reassigned female after a botched surgery. Both attempted suicide as adults and one succeeded. Messing with a person's gender and their perception thereof may just be a bad idea.”

bambina54 said, “Won't this poor child wonder one day 'why are my brothers and dad considered boys and my mom a girl but I am neither?' "

But others thought there would be no harm done. franglass said, “These parents are trying to avoid telling their children how to express their gender and I think that's awesome. More power to them for not relegating their children to the ‘pink’ or ‘blue’ childhood.”

RushHawk said, "According to a Toronto Star article, the only others who know the baby's gender are the couple's sons; and they expect them not to tell? LOL!!”

poetx said, “Who cares. It's not your kid and they are not abusing him/her. People need to judge what they do and leave everyone else alone.”

Dixichick13 said, “The parents' efforts may be in vain. Much of our behavior and personality is hardwired in the womb by genetics and hormones. In other words, even if you buy your little boy dolls as well as trucks, if his brain is more masculinized, he will just use the dolls as speed bumps for his rolling trucks. “

millergirl asked, “Can it be possible this baby was born with both male/female genitalia and the parents and doctors aren't ready to decide whether to surgically make the baby male or female?”

CrowTRobot replied, "Now that would be a legitimate reason to raise a child that way, although now they can test for the number of X and Y chromosomes. In the past it was a guessing game.”

A U.S. Marine suspected in a four-house drug-smuggling operation died with the safety set on his semi-automatic rifle. A video from the sheriff's department showed that the uniformed SWAT team sounded its sirens, banged on the front door, kicked it in and then opened fire. Gaberlunzie3 said, “ ‘They absolutely responded how they were trained.’ So they are trained to murder people in their homes?”

whatudeserve said, “ ‘The police refused to allow paramedics to access Guerena for more than hour, leaving the young father to bleed to death, alone, in his own home.’ You want this to happen in your home? Goodness!!”

warrior001 replied, "If you point an assault rifle at a law enforcement officer and get shot, it's your fault. They identified themselves as officers. Why pick up a weapon and point it at them? I'm a Marine; we hold ourselves to a higher standard, or should anyway. Being a Marine, with two tours, doesn't make you above the law or more deserving. “

hylnderone said, “Wow. You've convicted him with no evidence. He was ‘suspected’ yet they found nothing in his house or vehicles. Have you no respect for life or for our laws? What if this was your son? What we do know is he was in his own house, had the legal right to own and possess a gun, never took his weapon off safety, but was shot 22 times in his own home and that there was zero evidence of any wrongdoing found in his home.”

usaforme said, “Yes, innocent until proven guilty, but you still don't point semi-automatic weapons at police officers and expect to live." bob8436 said, “We have no idea whether or not he knew what was going on. The poor guy could have just been asleep and reacted to panicked screams from his wife. If I were in my bedroom and my wife started talking about men with guns outside, you better bet I'd be aiming an assault rifle at the door.”

RB2 said, “The police were wrong. Someone died and two others, one of them a child, were endangered. When are we going to ditch the ‘shoot first, ask questions later’ mentality?”

Five doctors determined that war crimes suspect Ratko Mladic is well enough for extradition to the Netherlands to face the U.N. war crimes tribunal. He was arrested Thursday after more than 15 years in hiding.

icdeadpeople said, “Ooh, poor little thing, he's old, has a heart problem and is frail in health. Aren't they all? So am I supposed to feel sorry for a Hitler incarnation? Or that old, frail SS prison guard sentenced earlier this month?”

Guest said, " ‘His health is very deteriorated.’ I can well imagine, after the ghosts of 8,000 men and boys have been haunting him.” soprano141 said, “May you never rest in peace, Mladic.” ComeOnMan9 said, “A waste of time to fit him for prison garb, he comes back as a cockroach over and over. Problem solved.”

globaldecay said, “I heard a low ranking subordinate of Mladic [was] questioned by the U.N. war crimes tribunal as to why he did what he did to his next-door neighbor. He said ‘500 years ago his ancestors killed my ancestors, and that’s why I chained a cinderblock around his neck and threw him in the river.’ Wars Don’t End!”

GhostofOsama said, "I'm confused. When we Moslems want a homeland, refuse to allow anyone to practice another religion, and kill those that don't comply; we are holy warriors. We apply this label even when the homeland to which we refer belongs to others that invited us in. When others defend themselves or do the same thing, we are outraged and call them butchers. If there is one god, there is one standard. I say we are guilty of the same butchery and should spend an equal amount of our time ridding ourselves of the culture of violence that so many in our religion enjoy.”