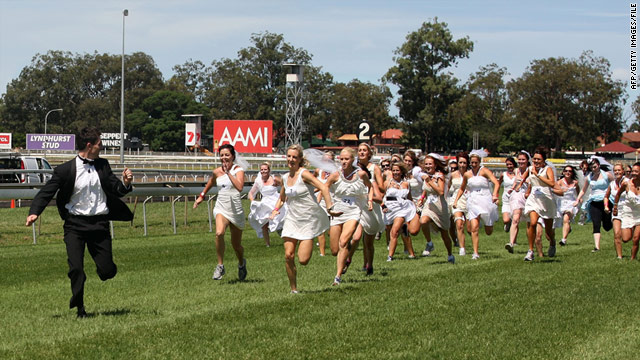 Peters said she came up with a tour service, Thank Goodness He’s a Country Boy, that caters to women but also addresses a serious issue in Australia's urban areas: Evidently it's where the boys aren't.

In 2008 a book by author Bernard Salt stated Australia had nearly 100,000 more women than men in its metropolitan areas. The book even had maps that showed where the guys were.

Is it that bad for single women in Australia, particularly in New South Wales, Queensland and Melbourne, areas where Peters operates her agency?

In February a Brisbane radio station ran a promotion, Running of the Brides, that pitted women in bridal dresses in a race after one man. The pre-Valentines Day stunt was a gas, but the event was put on after statistics that showed there were seven women to every one man in the city.

Peters, who also owns an event company, said she remains single despite running into great guys every time she organizes a tour.

“What we do is we take the city girls out to the country and throughout the day. The women get fully pampered, they get makeup, they go out to eat and the guys put on a massive show,” she said.

Peters said she’s been doing the tours for about six months now and has an “85% success rate.” She said her biggest outing consisted of 200 women heading to the dust roads and Outback bush in search of menfolk.

“I try to go out into the town and meet as many of the guys as I can beforehand,” she said, “because many of them are shy. They aren’t just farmers, either. They are plumbers, run-of-the-mill normal, ordinary men.”

The girls night out does come with a cost: Peters said she charges $350 for women and $50 for men.