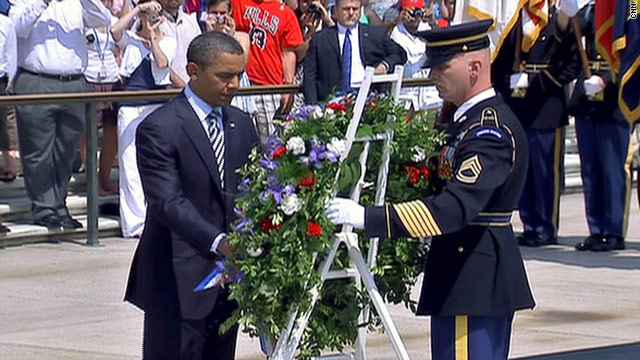 President Barack Obama led the nation's Memorial Day observances Monday, laying a wreath at Arlington National Cemetery's Tomb of the Unknowns and declaring that Americans owe "a debt to our fallen heroes that we can never fully repay."

"The blessings we enjoy as Americans came at a dear cost," Obama told a crowd at the cemetery's Memorial Amphitheater. "For those of you who mourn the loss of a loved one today, my heart goes out to you."

Military servicemen and women killed while serving their country "gave of themselves until they had nothing more to give," he said. Americans everywhere should honor their "courage," "selflessness," and "devotion to duty."

We need to "hold their memories close to our hearts and (heed) the examples they set," he said.

Earlier in the day, the president and first lady Michelle Obama hosted a breakfast for Gold Star families at the White House.

Gold Star families are those who have lost relatives serving in the military.

The president was joined for the ceremony at Arlington by Defense Secretary Robert Gates and Joint Chiefs of Staff Chairman Adm. Mike Mullen. Both men are retiring later this year.

"It is up to us to be worthy of (the) sacrifice" of the fallen, Gates said. "For the rest of my life, I will keep these brave patriots and their loved ones in my heart."

"God bless our fallen, the missing, and their families," Mullen said. "And God bless America."

The Queen has described being left with a "huge void in her life" after her husband Prince Philip's death, their so‚Ätwitter.com/i/web/status/1‚Ä¶f2
cnni

9:20 am ET April 11, 2021 RETWEET
34% of Covid-19 survivors received a diagnosis for a neurological or psychological condition within six months of t‚Ätwitter.com/i/web/status/1‚Ä¶Ut
cnni