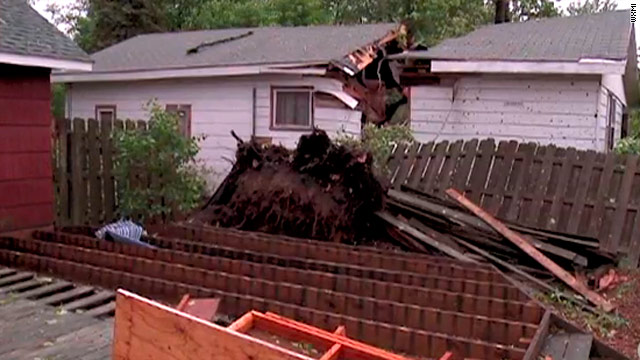 More storms in Midwest - Many people across the midsection of the country are going to spend Memorial Day cleaning up, after severe storms hit Michigan, Indiana, Iowa and Illinois overnight. More than 100,000 people in those states are without power. "It sounded like a freight train." That's the refrain of this past week. Missourians described the tornado that hit Joplin, Missouri, on May 22 that way, and now someone is using the same description in Michigan. Winds of more than 80 mph hit Battle Creek, Michigan. Hundreds of flights were canceled in Chicago.

Twin suicide bombings in Afghanistan - Suicide bombers targeted security forces and foreign civil affairs workers in separate blasts Monday in the western Afghanistan city of Herat, killing at least five people and wounding 33, a police official told CNN. The attacks occurred within minutes of each other just blocks apart in Herat, an area where U.S. military officials have hinted American troops would be withdrawn by July because it has been largely free of violence.

The second bomber  blew himself up outside the main gate of a compound that is home to a Provincial Reconstruction Team, an attack that allowed gunmen to rush inside. Afghan and NATO-led forces fought the gunmen, Afghan government official Harif Taib told CNN. A police commander later said the situation was under police control and the gunfight had ended.

Endeavour heads home - The space shuttle undocked from the international space station and is scheduled to land early Wednesday morning. There is one last shuttle mission after Endeavour's journey: Atlantis is scheduled to launch in July.