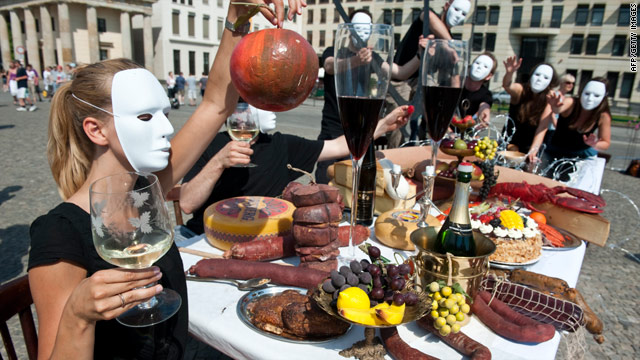 The poor reach for food from the table of the rich during an Oxfam-produced performance in front of Germany's Brandenburg Gate on Tuesday.
May 31st, 2011
10:31 AM ET

Climate change and decreasing natural resources will increase pressure on food supplies in the coming decades, threatening millions of people with chronic hunger, Oxfam International said in a report Tuesday.

‚ÄúOur world is capable of feeding all of humanity yet one in seven of us are hungry today," Oxfam Executive Director Jeremy Hobbs says in a press release.

Oxfam puts the blame for the crisis on governments, businesses and wealthy elites.

"Paralysis is imposed upon us by a powerful minority of vested interests that profit from the status quo," says the report, titled "Growing a Better Future."

Oxfam cites the price of maize, or corn, as an example of problems with the system.¬Ý It says the price of this staple is expected to double during the next two decades. The effects of climate change on the crop are blamed for half that rise. Use of corn for biofuels also accounts for a chunk. Oxfam criticizes government policies in both areas.

"U.S. policy ensures 15 percent of the world‚Äôs maize is diverted to engines, even at times of severe food crisis. The grain required to fill the petrol tank of an SUV with biofuels is sufficient to feed one person for a year," Oxfam says in its press release.

Triple digit increases are also expected in the prices of rice and wheat.

The Oxfam report cites three main challenges that it says must be addressed:

- Equity: A quarter of the food bought by consumers in wealthy countries may be wasted, while 1 billion people in developing countries lack enough food, it says.

- Sustainability: Demand for food will increase by 70% by 2050, but yields will inch up by less than 1% a year in the next decade, Oxfam says.

"Without urgent action to tackle the interlinked challenges of production, equity, and resilience, the future will be one of zero-sum competition between states, resource grabs by powerful elites, and ecological collapse," the report says.

Some recent "victories" give reason for hope, the organization says:

- Vietnam has cut hunger rates in half, five years ahead of schedule, through land reform and investment in small farms.

- Canada has reduced red tape to get food aid to the needy.

To replicate those success stories, Oxfam says, governments "must act as custodians of the public good rather than allowing elites to drag them by the nose"; businesses must "embrace progressive regulation rather than seek to undermine it or water it down"; and citizens and customers must demand that government and business take proper action.

4:45 pm ET May 26, 2022 RETWEET
Iceland's glaciers are melting fast, some at a rate of over 150 meters a year. University of Iceland director Thorr‚Ätwitter.com/i/web/status/1‚Ä¶2w
CNNweather

9:21 am ET May 26, 2022 RETWEET
Sandstorms threaten to wreak havoc on a region that's vital to the global economy, and experts warn that the phenom‚Ätwitter.com/i/web/status/1‚Ä¶fJ
CNNweather

10:36 am ET May 25, 2022 RETWEET
Australians voted for stronger action on climate change -- but for a nation that's long built its wealth on coal an‚Ätwitter.com/i/web/status/1‚Ä¶VY
CNNweather

7:48 am ET May 25, 2022 RETWEET
The water level in Lake Mead ‚Äî the nation's largest reservoir ‚Äî dropped below 1,050 feet elevation for the first twitter.com/i/web/status/1‚Ä¶J9Bkv8
CNNweather

The Biden administration is preparing to step up the kind of weaponry it is offering Ukraine by sending advanced, l‚Ätwitter.com/i/web/status/1‚Ä¶vm
cnni

7:31 pm ET May 26, 2022 RETWEET
A Palestinian Authority investigation into the killing of journalist Shireen Abu Akleh has found that she was fatal‚Ätwitter.com/i/web/status/1‚Ä¶wF
cnni

7:01 pm ET May 26, 2022 RETWEET
Justin Timberlake has sold his entire song catalog to a Blackstone-backed management company, joining a wave of rec‚Ätwitter.com/i/web/status/1‚Ä¶NW
cnni

6:45 pm ET May 26, 2022 RETWEET
Hundreds of thousands of Ukrainians have been processed through Russian "filtration camps" in eastern Ukraine and s‚Ätwitter.com/i/web/status/1‚Ä¶Zl
cnni

5:45 pm ET May 26, 2022 RETWEET
Colin Kaepernick trained with the Las Vegas Raiders this week, signaling a potential comeback in the NFL, according‚Ätwitter.com/i/web/status/1‚Ä¶ls
cnni