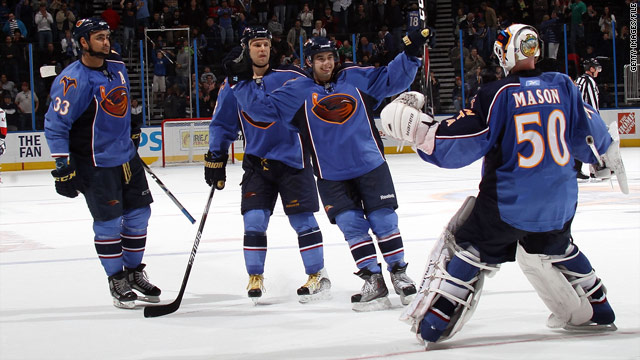 The new owner of the franchise, True North Sports and Entertainment, announced Tuesday that it has acquired the team from its current owners, Atlanta Spirit.

"I am excited beyond words" to make this announcement, True North CEO Mark Chipman said Tuesday.

The transaction is subject to the approval of the NHL Board of Governors later this month.

The Thrashers will be the second NHL franchise Atlanta has lost to Canada. The Flames moved to Calgary, Alberta, in 1980. Winnipeg lost its previous NHL team, the Jets, to Phoenix in 1996. The team was renamed the Coyotes in Phoenix.

NHL Commissioner Gary Bettman's words that hockey was stronger than ever in Canada sparked loud applause in Winnipeg. And then he said the words many residents of the city have been waiting to hear from the NHL:

"It's nice to be back in Winnipeg after all these years."

That sentiment was echoed by Manitoba Premier Greg Selinger.

"NHL - welcome home," he said. "It's great to have you back here where you belong. We've missed you, and we're going to make it work forever."

Bettman also had some words for Thrashers fans. He said the NHL doesn't like to move franchises unless it has to. And just like when the Jets were forced to leave Winnipeg in 1996, sometimes, "we simply don't have a choice."

"To fans in Atlanta, we are not happy about leaving Atlanta," he said. "Please be assured it was not about whether Winnipeg is better than Atlanta."

The Thrashers sent out an e-mail to fans thanking them for their support.

"It's extremely disappointing to all of us that [the sale] became necessary after all other options were exhausted," the e-mail said. "We want to express my gratitude to you, the fans, for the years of dedication to the Atlanta Thrashers.

But in Canada, where hockey is king, fans couldn't be happier.

Many are hoping the move can mean a return chance at cheering for the Jets, with the trending topic #gojetsgo picking up steam with the announcement. However, there has been no indication yet what the team would be named.

Chipman, who was involved with the effort to save the Jets years ago, said there is no doubt the loss affected the psyche of the town. But he is excited to bring the NHL back to the people of Winnipeg

And video around Winnipeg showed massive groups gathering at The Forks and other major areas, cheering, wearing Jets jerseys and chanting "Welcome back, welcome back" and "Go Jets, go."

"It's a fantastic day for the city, and I'm hoping, you know, for decades on, everybody will get to experience the NHL and the economic impact and the wonderful pride that comes with being a city that has the best of the best," Winnipeg Mayor Sam Katz told the CBC.