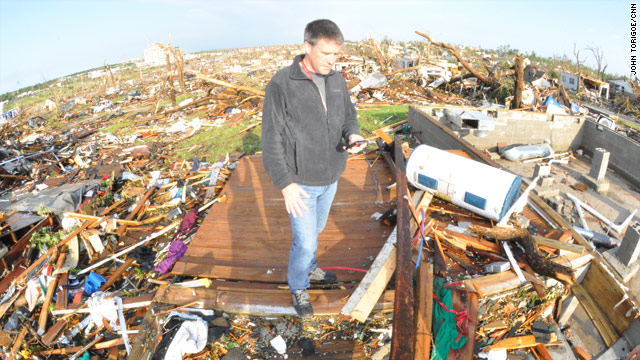 Stories from the rubble: A CNN producer's impressions

In the past month, I've covered two of the worst tornadoes to hit the U.S. in decades.

The devastation and heartbreak in Tuscaloosa and Joplin are truly indescribable. I met so many people who, I think, could not process what had happened. I watched them climb through rubble in the unrecognizable landscape, searching for something familiar among shredded clothing, soaked and mildewy photos and smashed electronics. What looked like garbage to me was a keepsake to them. A torn family picture, a hand-me-down table or a random cell phone with pictures of the neighborhood were scattered among the miles and miles of twisted metal. There were brief smiles as mementos of the life that had been there just yesterday were found.

Jim Richards found his wife's immigration green card a couple of houses away from his previous home and, amazingly, his iPad buried under an overturned Jeep. He laughed as he told me the iPad cover was destroyed, but the iPad, with all his family photos, e-mails and contacts, worked just fine.

His wife, Stacy, clung to her dogs' kennels in the kitchen as the tornado ripped their house off its foundation. She said, "I could feel the dog's crates lifting up so I got on the floor and I was holding the dog crates and I had one other dog under my arm and things started to land on me." The debris included a central air conditioning system that trapped her and her dogs until a neighbor heard her screams from underneath and managed to dig her out. Those kennels kept the weight of the air conditioner from crushing her.

In Tuscaloosa, I heard eerily similar tales. Chris Wozniak threw on a motorcycle helmet and hopped into his bathtub with his two leashed dogs.Â His house rolled over him, and two Krispy Kreme doughnut trucks crashed through his living room. He said the dogs flew up into the air like kites, and the only reason they weren't sucked away and survived was because he held on so tightly to those leashes.

But among the survivor stories there was also incredible heartbreak. Steffanie Osborn lost her husband, Dennis, in the Home Depot in Joplin. She stood outside the wreckage all day on the day after the tornado struck, hoping he would come out. As a rescue worker, she had access to the site.

She said Dennis served a tour of duty in Iraq in the Army National Guard and was getting ready to deploy overseas again in a few weeks. His body was found May 24, and she was told he died a hero. "He was found covering a body to protect them from debris."

Fighting back tears, she added, "He was being a soldier. That's what he does."Â  When we last saw her, she was fighting with the county coroner to get his remains released so she could have a proper funeral.

As I headed home on Memorial Day, all I could think of was the people I've met. On Tuesday, I'll get my hair cut, pay bills and see my kids. On Wednesday, I'll go back to work. I've got my life back.

In Joplin, they're still searching through rubble, and along with the people of Tuscaloosa, they will live with the fallout from these horrible disasters for a lifetime. As for Osborn, she said it's too soon to think about what to do next, but in the next breath added that Dennis always wanted her to become a registered nurse, so she may go back to school to do so.