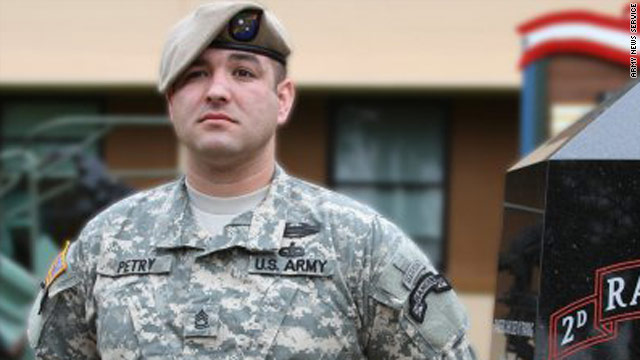 Army sergeant to get Medal of Honor for Afghanistan heroics

An Army Ranger who lost his right hand while tossing an enemy grenade away from fellow soldiers in Afghanistan will be awarded the Medal of Honor, the U.S. Army announced this week.

Sgt. 1st Class Leroy Arthur Petry will be the second living recipient of the Medal of Honor from the Iraq and Afghan wars, according to the military. President Barack Obama will present the award to Petry on July 12.

"It's very humbling to know that the guys thought that much of me and my actions that day, to nominate me for that," Petry said, according to an Army News Service report.

Petry is being awarded the medal for actions on May 26, 2008, in Paktia, Afghanistan.

Already wounded by a bullet that went through both his legs, Petry picked up an enemy grenade that landed near him and two fellow Rangers and threw it back toward the enemy, according to the Army News Service report. The grenade detonated and amputated Petry's right hand. Petry applied a tourniquet to his wound and called for help.

"If not for Staff Sergeant Petry's actions, we would have been seriously wounded or killed," a fellow Ranger, Sgt. Daniel Higgins, wrote. Read the full Army News Service report on the battle.

Petry, now assigned to Fort Benning, Georgia, will be the ninth service member to be presented the Medal of Honor for actions in Afghanistan or Iraq. The other living recipient is Staff Sgt. Salvatore Giunta.

Petry, a father of four from Santa Fe, New Mexico, has served two tours of duty in Iraq and six in Afghanistan.