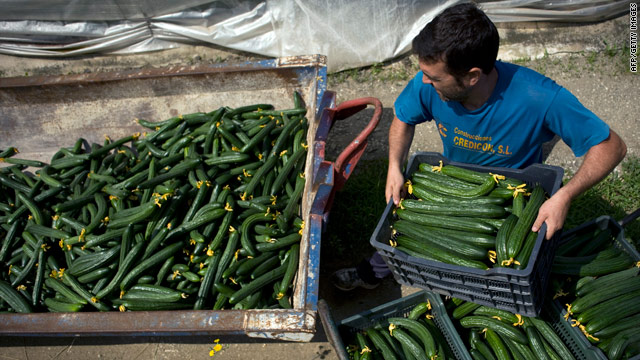 A farm worker throws away cucumbers, which have been pinpointed as one source of the outbreak.
June 1st, 2011
09:27 AM ET

A Spanish official bristled Wednesday at accusations that Spain was the cause of a deadly E. coli outbreak that has swept across Germany and Sweden.

Deputy Prime Minister Alfredo Perez Rubalcaba said, in a SER radio interview, that Spain will not rule out "taking action against the authorities (in Germany) who questioned the quality of our products."

Last week, German officials implied Spanish cucumbers were the cause for the illness that had sickened people. Rubalcaba responded forcefully to that accusation.

"If it was from the cucumbers, there would be cases (of illness) in Spain," Rubalcaba said, adding that there haven't been. "The Hamburg (Germany) authorities don't know where it comes from. I understand they have a problem. We have said, 'You need to say it wasn't us.'"

While authorities in Germany worked to contain and respond to the outbreak, the specific cause remained unclear.

11:26 pm ET January 15, 2022 RETWEET
FBI asked what led up to ending and dead hostage taker. No comment. No details released at news conference so farâ€twitter.com/i/web/status/1â€¦zq
susancandiotti