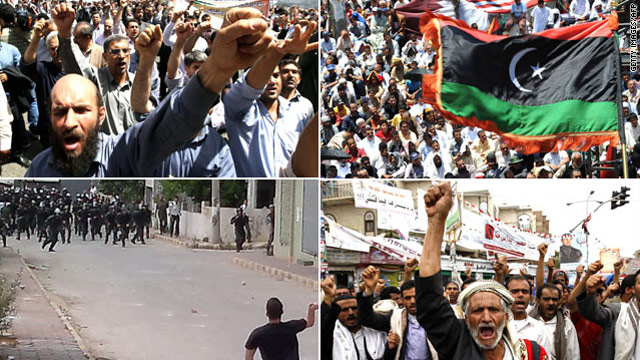 Countries in the Middle East and North Africa have been swept up in protests against longtime rulers since the January revolt that ousted Tunisian strongman Zine El Abedine Ben Ali. In many cases, these demonstrations and movements have been met with brute force and escalated into seemingly unending violence.

We take a look at what's next for the 'Arab Spring,' the roots of unrest from country to country, and look at the latest developments going on.

On Wednesday, Bahrain lifted state-of-emergency laws that had allowed for a crackdown on opposition leaders and journalists, while warning against anti-government activity.

The announcement by the country's Information Affairs Authority followed one from the justice ministry the day before, warning against "any type of activities that could affect the security or harm the national peace and safety."

The lifting of the emergency laws, imposed in mid-March, is thought to be an effort to signal an end to months of civil unrest.

Protesters initially took to the streets of Manama to demand reform and the introduction of a constitutional monarchy. But some are now calling for the removal of the royal family, which has led the Persian Gulf state since the 18th century.

Young members of the country's Shiite Muslim majority have staged protests to complain about discrimination, unemployment and corruption, issues they say the country's Sunni rulers have done little to address.

Syria on Tuesday announced that it is granting "amnesty" to protesters accused of committing crimes.

Report: Syrian abuses could be 'crimes against humanity'

Four missiles struck a compound where generals who defected from the Yemeni regime were meeting, a spokesman for the defected generals said Wednesday.

The spokesman, Askar Zuail, said there were no injuries or deaths as a result of the Tuesday-night assault, which he believes was committed by Yemeni President Ali Abdullah Saleh's regime.

A government spokesman denied the report to Al Jazeera on Tuesday. A senior defense ministry official who did not want to be named for security reasons also denied the claim to CNN.

The generals who defected are now running the largest military base in Sanaa. But despite such cracks in Saleh regime, the deadly unrest rages on.

Fierce clashes erupted between government security forces and Hashed tribesmen Wednesday in front of the Ministry of Local Administration in Sanna, eyewitnesses and residents said.

The Hashed tribe has opposed government forces in intermittent fighting for more than a month.

Fifteen tribesmen have died and 31 have been injured from clashes in the past two days, said Abdul Qawi Qaisi, spokesman for the head of Hashed tribe.

Protesters have called for the ouster of President Ali Abdullah Saleh, who has ruled Yemen since 1978. The country has been wracked by a Shiite Muslim uprising, a U.S.-aided crackdown on al Qaeda operatives and a looming shortage of water.

High unemployment fuels much of the anger among a growing young population steeped in poverty. The protesters also cite government corruption and a lack of political freedom. Saleh has promised not to run for president in the next round of elections.

NATO has decided to extend its mission in Libya by 90 days, continuing a campaign that began in March, the alliance announced Wednesday.

Protests in Libya started in February when demonstrators, fed up with delays, broke into a housing project the government was building and occupied it.

Gadhafi's government responded with a $24 billion fund for housing and development. A month later, more demonstrations were sparked when police detained relatives of those killed in an alleged 1996 massacre at Abu Salim prison, according to Human Rights Watch. High unemployment and demands for freedom have also fueled the protests.