Marnie Schulenburg, a soap opera actress who documented her journey from becoming a new mother to a cancer patient,â€twitter.com/i/web/status/1â€¦85

The accused gunman in the mass shooting at a Buffalo supermarket was indicted by a grand jury on Wednesday, accordiâ€twitter.com/i/web/status/1â€¦6O 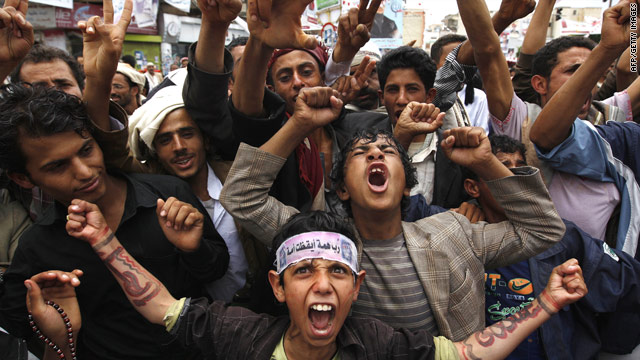 [Updated at 1:07 p.m.] Countries in the Middle East and North Africa have been swept up in protests against longtime rulers since the January revolt that ousted Tunisian strongman Zine El Abedine Ben Ali. In many cases, these demonstrations and movements have been met with brute force and escalated into seemingly unending violence.

Here's a look at what's next for the 'Arab Spring' and look at the latest developments from each country and information on the roots of unrest.

After state-of-emergency laws that had allowed for a crackdown on opposition leaders and journalists were lifted Wednesday it was thought to be an effort to signal an end to months of civil unrest.

As the state of emergency was lifted, protesters gathered across Bahrain, in locations including Aldiraz, Daih, Bani Jamrah, Karzakan, Abo Qowa, Duraz and Sitra, according to Nabeel Rajab, a prominent Bahraini human rights activist.

Rajab said peaceful protesters were attacked by security forces with tear gas and rubber bullets, causing injuries but no deaths. The demonstrations were dispersed soon after they started, he said.

Protesters initially took to the streets of Manama to demand reform and the introduction of a constitutional monarchy. But some are now calling for the removal of the royal family, which has led the Persian Gulf state since the 18th century. Young members of the country's Shiite Muslim majority have staged protests to complain about discrimination, unemployment and corruption, issues they say the country's Sunni rulers have done little to address.

One person was killed and three others injured Thursday, according to medical sources at a makeshift clinic on the front lines of Dafniya, west of the city of Misrata.

State TV reported explosions in Benghazi, saying one of them happened in the Ard Ezwawa region.

On Wednesday, NATO decided to extend its mission in Libya by 90 days, continuing a campaign that began in March. Libya's oil minister also confirmed Wednesday that he's defected and said he's considering signing up with the opposition movement.

Protests in Libya started in February when demonstrators, fed up with delays, broke into a housing project the government was building and occupied it. Gadhafi's government responded with a $24 billion fund for housing and development. A month later, more demonstrations were sparked when police detained relatives of those killed in an alleged 1996 massacre at Abu Salim prison, according to Human Rights Watch. High unemployment and demands for freedom have also fueled the protests.

Dozens of people have died in clashes with troops in western Syria, where government forces reportedly shelled homes in one town, protest organizers and a human rights official said Thursday.

The reports come a day after a leading human rights group accused Syria of committing abuses against anti-government protesters, who have been calling for a regime change. Syria has denied the allegations.

Secretary of State Hillary Clinton said on Thursday that al-Assad "has not called for an end to the violence against his own people, he's not engaged seriously in any kind of reform efforts, and the United States has taken a number of steps to try to put pressure on President Assad's regime."

Hundreds of activists at a meeting in Turkey titled "Conference for Change in Syria" issued a declaration on Thursday after several days of talks calling on President Bashar al Assad to step down and hand power to his vice president, with the goal of then organizing democratic elections.

The opposition gathering also declared its support for the "Revolution in Syria," and elected a 31-member council aimed at assisting the protest movement in Syria.

On Tuesday, the Syrian government announced it is granting "amnesty" to protesters accused of committing crimes.

A group of about 1,000 armed tribesmen were seen by residents entering the capital of Yemen early Thursday saying they are supporting Sheikh Sadeq Al-Ahmar, a leader of a tribe that has been in street battles with government forces recently.

A breaking news banner on Yemen state television proclaimed that government forces had beat back tribesman loyal to Al-Ahmar from areas of the capital near the Ministry of Tourism building.

A security official at Sanaa International Airport said inbound and outbound flights have been halted due because of security concerns over clashes near the airport. But the official, who is not authorized to speak to the media, said that the airport itself is not closed.

Meanwhile, eleven tribesman were killed in clashes overnight and early Thursday, an official with the tribe said.

Abdu Ganadi, a government spokesman, said six civilians were killed in the past day.

On Wednesday, four missiles struck a compound where generals who defected from the Yemeni regime , a spokesman for the defected generals said. The spokesman, Askar Zuail, said there were no injuries or deaths as a result of the Tuesday-night assault, which he believes was committed by President Saleh's forces. A government spokesman denied the report to Al Jazeera. A senior defense ministry official who did not want to be named for security reasons also denied the claim to CNN.

Protesters have called for the ouster of President Ali Abdullah Saleh, who has ruled Yemen since 1978. The country has been wracked by a Shiite Muslim uprising, a U.S.-aided crackdown on al Qaeda operatives and a looming shortage of water. High unemployment fuels much of the anger among a growing young population steeped in poverty. The protesters also cite government corruption and a lack of political freedom. Saleh has promised not to run for president in the next round of elections.

Extreme temperatures and ongoing drought could cause the power grid to buckle across vast areas of the United Stateâ€twitter.com/i/web/status/1â€¦kR
cnni

4:31 pm ET May 19, 2022 RETWEET
Ford is advising the owners of 39,013 Ford Expedition and Lincoln Navigator SUVs to park their vehicles outdoors beâ€twitter.com/i/web/status/1â€¦vI
cnni

4:15 pm ET May 19, 2022 RETWEET
Rihanna is now a mom. The superstar singer and her artist partner A$AP Rocky have welcomed their first child, a soâ€twitter.com/i/web/status/1â€¦2U
cnni

Extreme temperatures and ongoing drought could cause the power grid to buckle across vast areas of the United Stateâ€twitter.com/i/web/status/1â€¦kR
cnni

4:31 pm ET May 19, 2022 RETWEET
Ford is advising the owners of 39,013 Ford Expedition and Lincoln Navigator SUVs to park their vehicles outdoors beâ€twitter.com/i/web/status/1â€¦vI
cnni

4:15 pm ET May 19, 2022 RETWEET
Rihanna is now a mom. The superstar singer and her artist partner A$AP Rocky have welcomed their first child, a soâ€twitter.com/i/web/status/1â€¦2U
cnni

Oklahoma lawmakers have passed a bill banning abortion from the moment of "fertilization." The measure now goes toâ€twitter.com/i/web/status/1â€¦ZG
cnnbrk

3:42 pm ET May 19, 2022 RETWEET
The January 6 committee is investigating the tour a Georgia Republican lawmaker gave to visitors the day before rioâ€twitter.com/i/web/status/1â€¦FR
cnnbrk

3:15 pm ET May 19, 2022 RETWEET
Marnie Schulenburg, a soap opera actress who documented her journey from becoming a new mother to a cancer patient,â€twitter.com/i/web/status/1â€¦85
cnnbrk

12:22 pm ET May 19, 2022 RETWEET
The accused gunman in the mass shooting at a Buffalo supermarket was indicted by a grand jury on Wednesday, accordiâ€twitter.com/i/web/status/1â€¦6O
cnnbrk

10:52 am ET May 19, 2022 RETWEET
President Biden will invoke the Defense Production Act, among other actions, in an effort to ease the national babyâ€twitter.com/i/web/status/1â€¦H6
cnnbrk