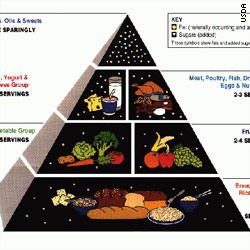 The food pyramid will be replaced

Dietary guidelines: First lady Michelle Obama and several other officials will unveil a new food icon Thursday to replace the food pyramid, the symbol that showed us what a healthy diet looks like.

The new symbol "will serve as a reminder to help consumers make healthier foodÂ  choices," the White House said.

Obama will be joined by AgricultureÂ  Secretary Tom Vilsack and Surgeon General Regina Benjamin during the event at the auditorium in the Department of Agriculture.

The move is part of Obama's push to fight childhood obesity.

Garrido sentencing: Two decades after kidnapping Jaycee Dugard in front of her California home, Phillip and Nancy Garrido will be sentenced to life in prison Thursday.

The married couple pleaded guilty in late April in El Dorado Superior Court to the kidnapping and sexual assault of Dugard, whom they held captive from age 11 through age 29.

Illinois civil unions: Thirty couples will participate in civil union ceremonies Thursday in Chicago's Wrigley Square at Millennium Park as the city celebrates the first day such unions are allowed in Illinois.

The Illinois Religious Freedom Protection and Civil Unions Act, allowing same-sex unions in the state, became law on Wednesday, allowing couples to obtain their licenses from a county clerk's office. Under Illinois law, couples must wait a day after obtaining their civil union licenses before the ceremonies may be performed.