Derick Almena, the leaseholder of an Oakland, California, warehouse-turned-art collective that went up in flames inŌĆtwitter.com/i/web/status/1ŌĆ”5j

NBC Sports Network is shutting down at the end of this year, the company said. The cable network will cease operatiŌĆtwitter.com/i/web/status/1ŌĆ”iR 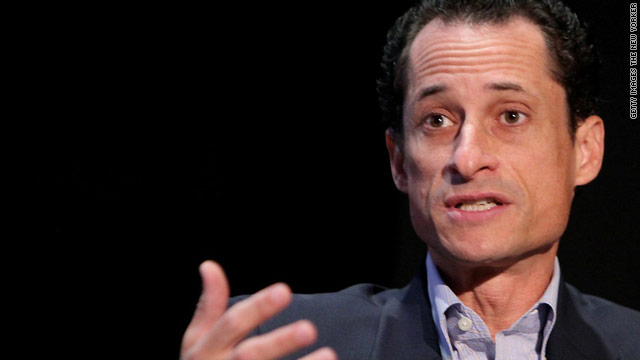 "That FOX and CNN are making so much of this is the obscenity. A picture of gray undies with a bulge? Please, I see more revealing images on Saturday morning cartoons. This country must be the laughingstock of the developed world. So puritanical and uptight. Get a life!!"–Jambo

U.S. Rep. Anthony Weiner, pictured, D-New York, told CNN that he did not post a lewd photo apparently sent to a young woman from his Twitter account. Did he recognize himself or his underwear in the picture? He would not say.

Many CNN.com readers said the story was embarrassingly unimportant. Mascon, a Canadian, said, "I am always laughing at the reactions of the Americans, but this one really takes the cake. If his name was not Weiner it would never been in the news. I find nothing lewd about the picture. To thinking people, Weiner has handled it well; and to the others...who gives a crap??"

Androidicus┬Āsaid, "What, it's against the law to send photos of yourself in your underwear now?"┬ĀShinethelite said, "I haven't seen the picture but heard it was no big thing."

Sending such a photo is not illegal, Crockah said, and added: "But when a political figure does it - it becomes news."┬ĀThinkCareful said, "If it is a picture of him, it calls his judgment into question. There is only one reason those photos exist–to send to people who ask 'Let me see yours.'"

camwyatt said, "It goes to the character of the people we choose to represent us. So, yes we should care. Would you invite this guy to dinner if you had your daughter home from college?"┬ĀbillofRight said, "So poor moral character and outright lying by your elected officials is not newsworthy unless they are Republican?"

Still, Weiner's lack of clarification left some readers speculating ŌĆ” and quoting a popular news comedian.┬Āsysprogram said, "Jon Stewart had a point. Every man does know what his own junk looks like. So how could the good Congressman say at first that he wasn't sure the picture was of him?" bigtimecynic said, "In the words of Jon Stewart, who was friends with Weiner in college: 'My recollection was that he was more Anthony and less Weiner.' Classic."

The food pyramid came down today, replaced by a plate graphic that the U.S. Department of Agriculture says Americans will better understand. Guest said, "I love it. It is so cute and the small kids and elderly can identify a lot more with this diagram. KUDOS!" But JaydedKing replied, "You are one of those weird, persistently happy people that scare me."

Many CNN.com readers questioned the relevance of the new design. drc said, "What a waste of time and money to come up with some new diagram for the average dumbed-down American who honestly couldn't care less. You cannot legislate or dictate common sense."┬Āmeschif said, "Don't people have enough common sense to know what is and what isn't healthy? People need an actual diagram like this?"

BradDean said, "People got confused and thought they were suppose to look like pyramids."┬ĀEnts said, "Have you looked at people lately? The average size of children is larger than the average IQ of their parents."

Some readers suggested other ways to encourage healthy eating. K3Citizen said, "I think plastering pictures of obese people on the packages of unhealthy products is the best way to get a thinner and healthier America."

Wzrd1 said, "Tax the hell out of fast food and junk food, sending that money to pay down the deficit. It'll be zero in no time, along with the obesity rate. It worked with tobacco products!"

WithReason said, "If people got penalized on their health insurance premiums for being fat, I think that would have a better chance at fixing the problem."

Others argued over whether dairy products should have been included in the new recommendations. mintymint said, "Humans are the only species who continue to drink milk after childhood. No other mammals drink milk after they have been weaned from the breast. Why is this?"

But sbast18 said, "Not true. My sister's cat drinks milk every day." And cartoguy asked, "You ever try dunking a cookie in water?"

Zuckerberg kills what he eats. Should you?

Chef Dan Barber spoke up for Mark Zuckerberg, who recently wrote friends that he would only eat meat that he himself had killed. Barber, who has won the James Beard award for best chef and co-owns a New York farm-to-table restaurant, said in an interview with CNN.com's Pat Wiedenkeller that Zuckerberg's goal is "an incontestably moral act."

Many CNN.com readers spoke up for hunting. danield33 said, "Kind of sad that it takes a billionaire to demonstrate what respectable sportsmen across this country have know for hundreds of years. We as humans are omnivores and if the folks that criticize meat eating understand anthropology, biology, genetics and physiology then they would never make the absurd comment, 'Haven't we evolved past that?' "

Stoprunning said, "It's hilarious that some people in America are shocked by the act of hunting. It's far more humane than buying a box of frozen burgers from Walmart."┬Āclaiborne said, "I live in Louisiana and we have been killing our own food for a long time now. I'll have to tell all my hunting buddies that we're 'hipsters' now. This is just ridiculous."

UrthraFrnkln said, "It's ridiculous that modern people equate what humans have been doing for millenia with something that is now 'in vogue.' Factory farming and the obese humans they produce is the fad; they have only been around for a few decades."

BlackYowe said, "Food has become the new religion. I raise my own sheep for meat, but I take them to a little country butcher to get them processed. It still is a shock when I do it, but I feel better about eating the sheep I have cared for. Zuckerberg making this big deal out of killing his food is a bit strange. Around here it's common for people to hunt and eat whitetail deer. I guess urban folks must be full of guilt and self loathing or something."

e333111 said, "I grew up working on my uncle's farm. The whole place smelled like dung. Cow dung, chicken dung, dung fertilizer. Dung, dung, dung. I moved to the city to get away from all that. Now all my stupid neighbors want to start raising chickens and goats because it's the 'hip' thing. Just great."

Cestbear said, "We decided to raise a pig for meat because it was cheaper and better health-wise. I was responsible for the feeding & care of the pig. I grew quite attached to the pig. Until he attacked me. Damn fine pork chops."

istv said, "Just remember, never name your animals that you raise for food, unless it's Breakfast, Lunch, and Dinner.ŌĆØ

ŌĆ£Even though the family [took] Boncuk back home she managed to escape every day to wait at the hospital gate,ŌĆØ a twitter.com/i/web/status/1ŌĆ”WdbXjD
cnni

11:13 pm ET January 22, 2021 RETWEET
Ford is recalling 3 million US and Canadian vehicles with airbags manufactured by the same company whose devices haŌĆtwitter.com/i/web/status/1ŌĆ”sL
cnni