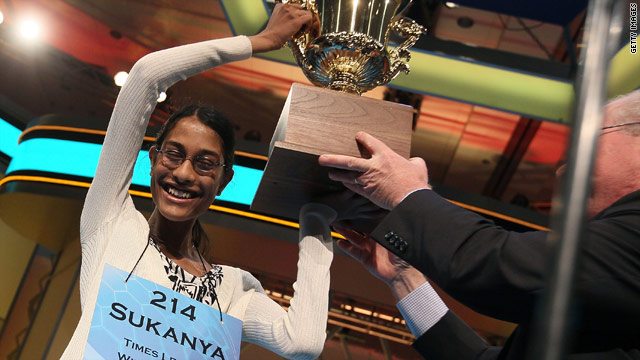 Sukanya, 14, won the annual spell-off Thursday night with the word cymotrichous, which means having wavy hair, topping 274 other contestants over two days and 20 rounds.

After nailing the last word, the eighth-grader covered her smile with a shaky hand, and moments later lifted a trophy that was handed to her at the Gaylord National Resort and Convention Center in National Harbor, Maryland.

"It's just amazing. It's hard to find the words" to describe the feeling, Sukanya (pictured) told ESPN's Rob Stone after she won.

She had a lot less trouble spelling the words she needed to win.

Among the 13 words she spelled correctly in Thursday night’s finals were psephomancy (divination by pebbles), pyopoiesis (the formation of pus), and völkerwanderung (the migration of nations).

Sukanya, an eighth-grader from South Abington Township who tied for 12th place at the competition in 2009 and 20th in 2010, outlasted 12 other finalists Thursday in a nearly three-hour session televised by ESPN.

The runner-up, three-time Canadian spelling champion Laura Newcombe, 12, of Toronto, missed the word sorites (an aggregation of related things) after correctly spelling such words as panguingue  (a kind of card game) and cheongsam (a type of dress).

Thursday night also ended another remarkable performance for Pennsylvania eighth-grader Joanna Ye, 14. She finished tied for third, one year after her hometown, Carlisle, honored her with a "Joanna Ye Day" for finishing the 2010 contest tied for fifth.

Sukanya won more than $40,000 worth of prizes, including $30,000 cash and a $5,000 scholarship. She told ESPN that she knew how to spell the last word immediately after it was read to her.

"My heart started pounding, I guess," she said. "I couldn’t believe it."

The bee, which takes champions from various regional contests, is open to students who are under 16 and haven’t passed beyond the eighth grade.