On the Radar: Doughnut day, Obama in Toledo, Shaq's announcement 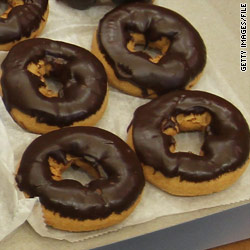 Obama will use the Toledo visit to emphasize why the government bailouts of Chrysler and General Motors were successful, CNN affiliate WTVG in Toledo reports.

Chrysler announced recently that it will repay government bailout loans six years ahead of schedule.

Among those expected to be in attendance for Obama's visit is Jeep assembly line worker James Fayson, according to a Toledo Blade report.

Fayson, 36, will appear in Obama 2012 campaign commercials explaining how the bailout allowed him to return to work after being laid off in 2009, the Blade reported.

Shaq's announcement: Four-time NBA champion Shaquille O'Neal will formally announce his retirement from basketball Friday during a news conference at his Florida home.

O'Neal first said Wednesday afternoon that he was going to hang up his jersey. The 39-year-old posted a link to a video on his Twitter account.

In  a brief message he said: "We did it. Nineteen years, baby. I want to  thank you very much. That's why I'm telling you first. I'm about to  retire. Love you. Talk to you soon."

O'Neal has been dogged by injuries in the latter stages of his career and played only 37 games for the Boston Celtics this season after struggling with an Achilles tendon problem.

He returned for two playoff games against the Miami Heat but managed just 12 minutes and he told an ESPN reporter that he didn't want to let Celtics fans down.

O'Neal won three titles with the Los Angeles Lakers after forming a devastating partnership with Kobe Bryant, and added a fourth in 2006 with the Miami Heat.

With 28,596 points, O'Neal is fifth on the all-time NBA scoring list and is second only to Michael Jordan on the all-time list of NBA Finals Most Valuable Player Awards.