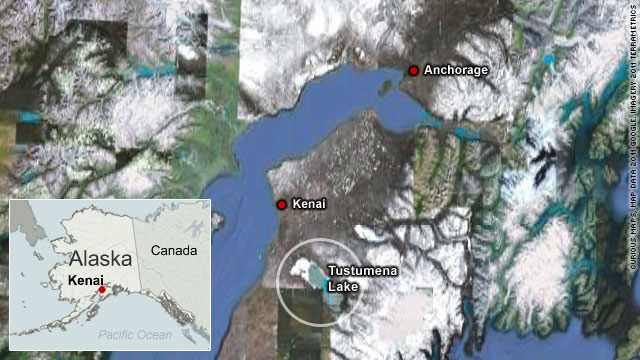 Three teenagers survived a brutal Alaska lake excursion that killed a father and one of their young friends.

Around 9:30 p.m. Friday, the man, Ashley Udelhoven, two of his daughters and two of their friends set out by boat to spend the weekend at a public cabin on the north shore of Tustumena Lake, a 25-mile-long, six-mile-wide body of water in south central Alaska. The lake is known to be perilous for small vessels because of unpredictable high winds that sometimes blow across it from nearby Tustumena Glacier.

The water was calm when the group began the journey. But Udelhoven decided to cut across the lake to save time, rescue officials told the Anchorage Daily News. About that time, winds picked up - blowing up to 45 mph - and the 18-foot boat filled with water. The surviving teenagers later told rescuers that they had seen swells as high as 9 feet.

The teens said the boat rocked violently, and everyone went overboard. As Udelhoven struggled in the freezing water, he began talking nonsense, a sign of hypothermia, the newspaper said.

One of the teenagers struggled to put on her life vest, which was too big and kept slipping, an official said.

The remaining three teens swam more than two miles back to shore, reaching land about 3 a.m. Saturday. They walked to a cabin, where they ate food and huddled for warmth, the newspaper reported.

Meanwhile, another boater spotted debris and a cooler floating on the lake that had Udelhoven's name and phone number written on it. The man called his wife, and she called troopers.

Rescuers found the bodies of Udelhoven and one of the teenagers - the one who struggled to put on her life vest - early Saturday evening, and the three surviving teens were found on land shortly after, the Daily News reported.

6:00 pm ET September 18, 2021 RETWEET
Here's what on the agenda as the 76th session of the UN General Assembly kicks off next week cnn.it/2Za9b9s
cnni

4:44 pm ET September 18, 2021 RETWEET
The Netherlands has long been the world's tallest nation ‚Äî but its people are getting shorter, according to Dutch rtwitter.com/i/web/status/1‚Ä¶e1rO
cnni

3:43 pm ET September 18, 2021 RETWEET
The world's largest tree has been wrapped in foil to protect it against flames from an out-of-control fire burning‚Ätwitter.com/i/web/status/1‚Ä¶g1
CNNweather