House Speaker Nancy Pelosi and Jill Biden appear on "State of the Union" in the wake of Amy Coney Barrett's nominat‚Ätwitter.com/i/web/status/1‚Ä¶c3 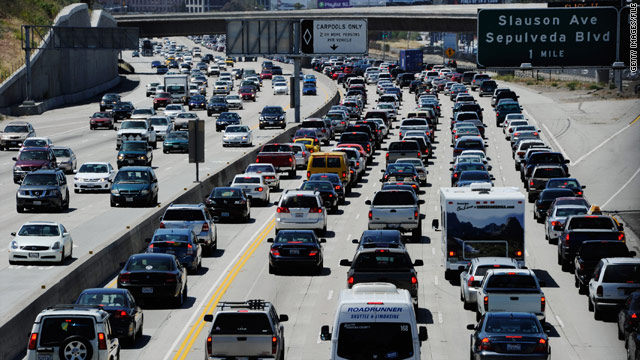 L.A. gridlock: The mayor of Los Angeles will hold a press conference on Monday to explain measures the city will take when the 405 Freeway, Southern California's busiest traffic artery, is closed for a weekend in July.

On the weekend of July 15-18, a 10-mile section of Interstate 405, also known as the San Diego Freeway, will be closed to take down the Mulholland Drive overpass in a plan to add a carpool lane and other improvements.

Transportation officials warn of multi-hour traffic delays in Los Angeles County and beyond during the weekend closure and warn residents to plan ahead.

Some just plan on hunkering down.

"We'll be landlocked and isolated. We're going to Ralph's early, stocking up and not leaving the house for two days," Gerald Silver of Encino told the Los Angeles Daily News.

Tropical weather: A large area of disturbed weather in the western Caribbean Sea stands a 40 percent chance of becoming the season's first tropical cyclone in the next two days, the National Hurricane Center reports.

An Air Force Reserve "hurricane hunter" aircraft will fly into the system Monday to take measurements, according to the NHC.

Forecasters warn that even if the system does not reach tropical cyclone status, it's still likely to bring drenching rains, flash flooding and mudslides to parts of Jamaica and Haiti, where hundreds of thousands of people remain displaced after the January 2010 earthquake that devastated Port-au-Prince.

The British Red Cross warned last week that the coming of the rainy and hurricane seasons to Haiti bring new fears of an increase in cholera. One treatment center reported a 50% increase in the past week.

Ex-Giant Burress to be released: Former NFL wide receiver Plaxico Burress is expected to leave a New York prison Monday after serving 20 months on a weapons charge stemming from a shooting incident at a nightclub.

The former New York Giants player accidentally shot himself in the leg with a .40-caliber semi-automatic pistol he was carrying in his waistband. The incident occurred in November 2008, in the VIP area of the Latin Quarter nightclub in Manhattan.

Burress was not licensed to carry a pistol in either New York or New Jersey, where he lived.

In August 2009, he pleaded guilty to a charge of attempted criminal possession of a weapon and agreed to serve two years under a plea agreement.

He spent the last 20 months at the Oneida Correctional Facility in Rome, New York.

Burress became a hero to New York Giants fans in the 2008 Super Bowl when he caught the game-winning touchdown pass from quarterback Eli Manning with 35 seconds remaining in the game.

Long-simmering tensions between Armenia and Azerbaijan appear to have flared up in the contested Nagorno-Karabakh r‚Ätwitter.com/i/web/status/1‚Ä¶xr
cnni

11:30 am ET September 27, 2020 RETWEET
Here's what you need to know about China's key flashpoints in the Asia-Pacific region. cnn.it/2Gh7jC5
cnni

10:31 am ET September 27, 2020 RETWEET
The Cherokee Nation's reservation boundaries are now visible on Google Maps ‚Äî an overdue acknowledgment of the tribtwitter.com/i/web/status/1‚Ä¶zdRq
cnni

10:01 am ET September 27, 2020 RETWEET
A wireless electric roadway in Israel will power some public buses as part of a pilot program to test a new green t‚Ätwitter.com/i/web/status/1‚Ä¶Dr
cnni