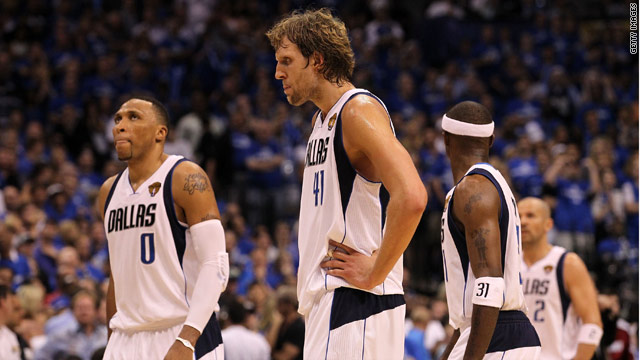 SI.com: Despite loss, Mavericks have reason for optimism

It almost fell apart - again - for the Miami Heat on Sunday at Dallas' American Airlines Center. There were glimmers of that Game 2 Mavericks comeback, but as Chris Bosh sank a 16-foot jumper with 39.6 seconds left, Dallas' hopes of taking a 2-1 lead in the NBA Finals slowly faded.

With less than five seconds left on the clock in Sunday's Game 3, Dallas big man Dirk Nowitzki couldn't shake a tough Miami defense, and he missed what would have been a game-tying shot, sealing Miami's 88-86 win. SI.com's Ian Thomsen explains that the back and forth battle bodes well for both teams as the series moves to Game 4 on Tuesday.

"Neither team can feel secure, and yet both have reason for optimism after Game 3," Thomsen writes. "The Mavs have two remaining home games that may yet send them back to Miami needing just one win to celebrate their first championship. James has shot a scant 10 free throws in three games, and yet he was increasingly aggressive while dunking off the dribble either in transition or the half court. Nowitzki had a splendid 34 points, 11 rebounds and three blocks, and if he could just realize more production from his teammates - who went 17-for-49 and for a second straight game watched him score all their points down the stretch (the last 12 this time) - a tight loss like this could turn into a steadying Dallas victory Tuesday in Game 4."

Vancouver Canucks vs. Boston Bruins (8 p.m., ET) The Bruins will look to rally in Game 3 of the Stanley Cup Finals and cut into the Canucks’ 2-0 lead at Boston's TD Garden.

9 - Number of laps led by Brad Keselowski at the STP 400 at Kansas Speedway on Sunday. Keselowski won the race, earning his first Sprint Cup victory in 66 races.