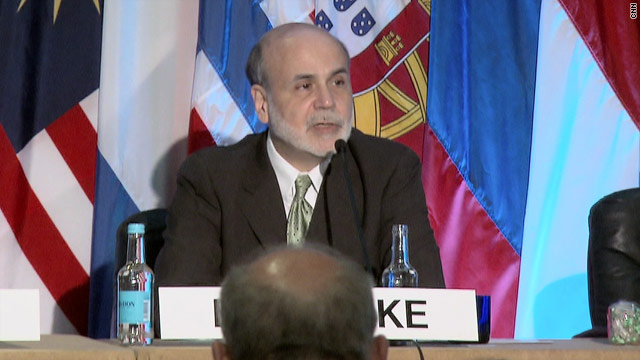 Speaking in Atlanta, Bernanke (pictured) acknowledged that economic growth this year has been slower than expected. But he said growth should pick up in the second half of the year if gas prices "moderate" and supply disruptions stemming from the disaster in Japan fade.

Bernanke twice called the job market "far from normal" and conceded, "the economy is still producing at levels well below its potential."

Bernanke made his remarks about 15 minutes before the closing bell, so investors did not have much time to react. But given the recent weakness in the market and the lack of economic data on the agenda this week, traders said the selling could carry over into Tuesday's session.

JPMorgan Chase CEO Jamie Dimon is still griping about financial reform, and this time, he took his complaints straight to the top official at the Federal Reserve.

"I don't personally buy the argument that because it was a financial crisis it has to take a long time coming out," Dimon said in a Q&A session following a speech by Ben Bernanke at the International Monetary Conference in Atlanta Tuesday.

In his speech, Bernanke acknowledged that the economy was "below its potential," following a recent onslaught of negative economic news including a disappointing jobs report and weaker than expected-economic-growth.

Dimon blames financial reform for stifling growth. He gave the Fed Chairman a laundry list of ways regulators have already cracked down on the banking system, after the Dodd-Frank financial reforms were passed last year. "Most of the bad actors are gone," "off-balance-sheet businesses are virtually obliterated," "money market funds are far more transparent" and "most very exotic derivatives are gone," he said.

Dimon, who is known for his vocal opposition of many of the Dodd-Frank reforms, said he fears those reforms may be hindering, rather than helping, the recovery.

After Dimon asked Bernanke whether "anyone bothered to study the cumulative effect of all these things,"Â Bernanke conceded that government officials have not examined the effect of stricter banking regulations may be having on economic growth.

- CNNMoney.com's Ben Rooney and Annalyn Censky contributed to this report.