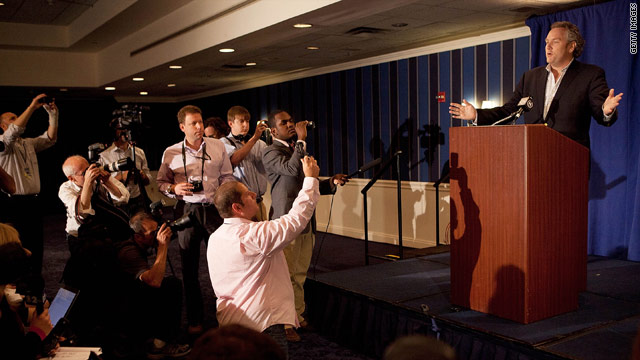 Breitbart on breaking Weiner story: I'm not the 'cruel person' some think I am

This morning on "American Morning," Breitbart.com and BigGovernment.com publisher Andrew Breitbart speaks with Kiran Chetry about why he chose to jump on stage before Congressman Anthony Weiner's press conference yesterday.

The man who broke the Rep. Weiner sexting scandal says he used the podium because his voice was hoarse.

"I walked into the ballroom and people surrounded me, started asking me questions," Breitbart said. "They said 'We can't hear you, can you get on the stage." I said, am I allowed to do that? I walked over to the stage, thought I was just going to be using the microphone to protect my voice, because I had bronchitis last week. I had zero idea they would cut it live."

Breitbart, who has been targeted by some for his tactics, said there was a little bit of vindication after Rep. Weiner admitted he was lying.

Breitbart said he is "not the cruel person" some think he is - in fact he has restrained from releasing photos he felt were even more damaging.

"I dont want to be known as the person who releases that photo," he said.

Breitbart adds that he has heard that more photos from the girls who were interacting with Rep. Weiner may be released, and cautioned against any additional photo release, especially if any of them were sent in return to Weiner by the girls.

"If they start going after the girls...as a way to tell girls not to come forward, I have the photo," Breitbart says of some unreleased photos of Rep. Weiner that he allegedly has possession of. "I can't fathom he would be stupid enough to start going after the girls and start releasing photos of them that they've given. Let it lie," Breitbart adds.

See the rest of the interview here.