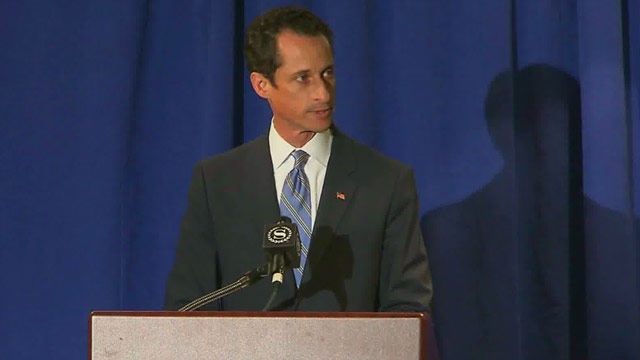 Lawmaker did send pics of himself: New York Rep. Anthony Weiner has admitted that he lied repeatedly over the past week and a half when he told reporters, colleagues and his friends that a hacker posted lewd photos of him to his Twitter account. Weiner apologized during a press conference on Monday and said that he has engaged in several inappropriate relationships with women he's met online. Listen to one woman talk about her involvement with him. Democratic observer James Carville says Weiner doesn't have a lot of fans in his own party. But the lawmaker said he will not resign and said it's up to voters to determine whether he continues in his job. Many are debating whether he violated any official House ethics rules. CNN's Wolf Blitzer told Piers Morgan on Monday that before Weiner confessed to lying, Blitzer "sort of believed" Weiner during an earlier interview when the congressman told the journalist he had no idea who had sent  the image.

Obama economic adviser leaving - President Obama's top economic advisor Austan Goolsbee is leaving the White House. He is returning to his previous job at the University of Chicago. The president says Goolsbee helped steer the country out of the worst economic crisis since the Great Depression.

Arizona wildfires - Firefighters are still battling fires that have scorched more than 230,000 acres, mostly in the Apache National Forest along the state's eastern border. Smoke is traveling into New Mexico and affecting air travel.

German chancellor at White House - President Obama is meeting with German Chancellor Angela Merkel today to discuss several issues including the European economic crisis. During her stay, Merkel will receive the Presidential Medal of Freedom when she attends a state dinner at the White House on Tuesday night.