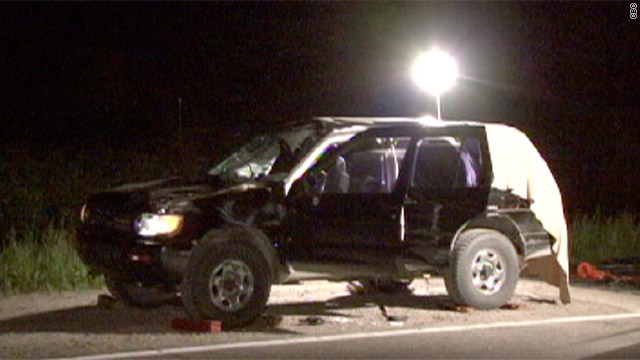 Two people died and a third was injured when a bear crashed through this SUV near Luskville, Quebec, police said.
June 8th, 2011
01:33 PM ET

Police in Quebec said a 300-pound male black bear wandered onto a road and was struck by an eastbound Pontiac Sunfire. The impact sent the animal hurtling through the air, where it smashed the windshield of a westbound Nissan Pathfinder sport utility vehicle and went out through the back window, regional police spokesman Officer Martin Fournel said.

The SUV's 35-year-old female driver and a 40-year-old man sitting behind her were killed; a 28-year-old front-seat passenger suffered minor injuries, Fournel said. In the Pontiac, neither the driver, a 23-year-old man, nor his 19-year-old male passenger was hurt.

No alcohol or drugs were involved, and police are still trying to determine each vehicle's speed in the 90 kph (56 mph) zone, Fournel said, adding that charges are unlikely.

"It's a first, there's no doubt about that," he said. "We had similar accident several years ago with a deer going through the windshield and ending up in the back seat, where it injured a boy. He wasn't killed, he was hurt. But it was not like this."

It's bear mating season, and many male bears are out looking - sometimes recklessly - for females, so drivers on rural roads should be watchful, hunting guide Daniel Larocque told the Canadian television network CBC.

The accident occurred near the town of Luskville, about 25 miles northwest of Ottawa, Ontario.