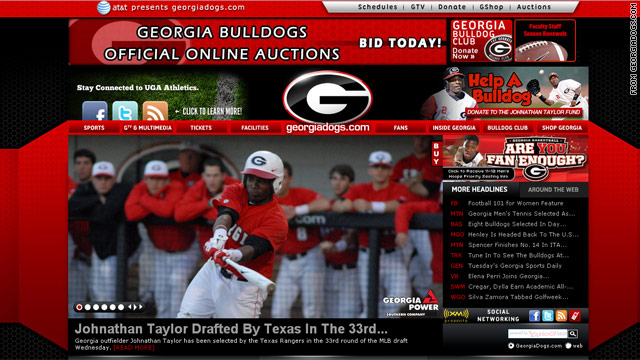 A college baseball player who was partially paralyzed in an outfield collision this year was selected Wednesday by the Texas Rangers on the third day of Major League Baseball’s draft.

Johnathan Taylor, a University of Georgia junior outfielder who is yet unable to walk since colliding with a teammate on March 6, was drafted in the 33rd round.

The Rangers also own the rights to the teammate who collided with him, Taylor's friend Zach Cone, whom the Rangers took Monday in the draft’s first round.

“We thought selecting Johnathan was the right thing to do,” Kip Flagg, the Rangers’ director of amateur scouting, said in a statement. “We would have drafted him either way, regardless of any other circumstances involving his injury or Zach’s draft status.

“Our area scout in Georgia, Ryan Coe, has had a relationship with Johnathan since he was a high school player. The club has always liked his passion and ability as a player. … As an organization, I think all of us are always trying to do the right thing in any situation. Taking Johnathan in the draft today, it was something we felt was right.”

Taylor fractured vertebrae in his neck and bruised his spinal cord when he dove for a line drive and collided with Cone during a game at home against Florida State.

After surgery to stabilize his spine, he was transferred to the Shepherd Center in Atlanta, where he left in-patient care on May 24 but is continuing outpatient rehabilitation.

Taylor told ESPN.com last month his goals included walking again and returning to the baseball field. His doctor at the Shepherd Center said most people with injuries similar to his don’t regain full use of their legs, ESPN.com reported.

“When he got the call, his face lit up, and we were all very excited,” she said. “It was awesome news.”

Georgia coach David Perno said the draft choice “was truly a classy move and a great gesture on the part of the Texas Rangers organization.”

“J.T. is definitely a player worthy of getting drafted. He’s been a big part of our program, and we are all very excited for him,” Perno said, according to the university’s Web post. “When I talked to him after he got the call, he was in the middle of his rehabilitation work, laughing and having a good time and was thrilled to be drafted.”

Cone said the Rangers had told him that they were thinking about drafting his teammate.

“I was already planning on going over to see him, and now we can talk about the Rangers,” Cone said after hearing Taylor was drafted, according to Georgia. “This made my day. It’s just awesome, and I’m so happy for him.”

Taylor batted .312 at 117 games at Georgia and had the team’s highest on-base percentage (.442) in his sophomore year.