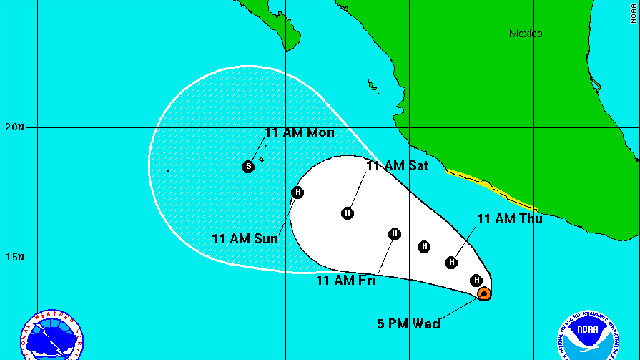 [Updated at 8:55 p.m. ET] The eastern Pacific Ocean has its first hurricane of the year.

The hurricane's center was about 265 miles southwest of Acapulco, Mexico, at about 5 p.m. PT. It was moving northwest - roughly parallel to Mexico's coast - and had maximum sustained winds of 75 mph.

"On the forecast track, the center of Adrian is expected to remain offshore of the coast of Mexico," the hurricane center said. "However, any deviation to the right of the forecast track could bring tropical storm conditions to the coast within the watch area (Thursday) and Friday."

A tropical storm watch is in effect for Mexico's coast from Acapulco westward to Punta San Telmo. Such a watch means tropical storm conditions are possible within the area.

[Original post, 1:40 p.m. ET] Tropical Storm Adrian is expected to become a hurricane as it develops in the Pacific Ocean near the coast of Mexico, the National Hurricane Center said Wednesday.

ŌĆ£Steep waves and hazardous surf conditions will develop along the coast of Mexico by Thursday as Adrian intensifies and moves parallel to the coastline,ŌĆØ an advisory said.

The storm is expected to stay offshore, sparing Mexico, but according to the hurricane center, "any deviation to the right of the forecast track could bring tropical storm conditions" to parts of Mexico on Thursday and into Friday.

MexicoŌĆÖs government and the National Hurricane Center have both issued tropical storm watches for the coastal area from Acapulco west to Punta San Telmo.

At 8 a.m. PDT, the storm was about 285 miles south-southwest of Acapulco and about 335 miles south of Zihuatenejo. It had maximum sustained winds of 70 mph and was moving north-northwest at 5 mph.

The storm is expected to intensify rapidly over the next 48 hours, the hurricane center said. Swells caused by the storm and its strengthening will probably begin affecting the southwest coast of Mexico later Wednesday.

"These swells could cause life-threatening surf and rip current conditions," the hurricane center said.

All businesses in Shanghai except those deemed vital (like gas stations and supermarkets) will be closed until FebrŌĆtwitter.com/i/web/status/1ŌĆ”4N
cnni

8:53 am ET January 27, 2020 RETWEET
The growing memorial outside of the Staples center for #KobeBryant and Gigi. ŌĆ£Thank you for all you did on the courtwitter.com/i/web/status/1ŌĆ”yMxy
sarasidnerCNN

8:46 am ET January 27, 2020 RETWEET
"He was one of the greatest sportsmen in history." Nick Kyrgios and Rafael Nadal paid emotional tribute to Kobe BrŌĆtwitter.com/i/web/status/1ŌĆ”VE
cnni