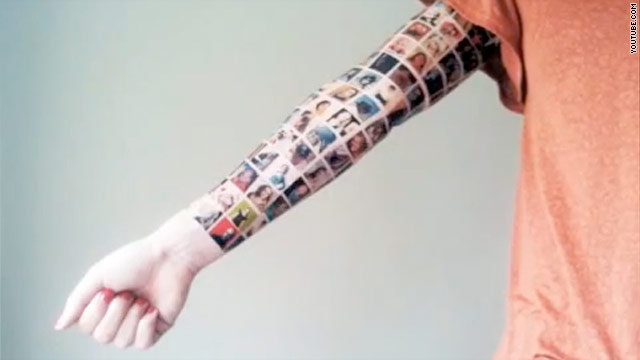 [Original blog posted at 11:24 a.m.] There are some people who "like" Facebook. And then there are people who are so devoted to their social media circle that they'll find some pretty extravagant ways to show it.

But this woman - who is gaining quite a bit of fame by posting a video last week on her "susyj87" YouTube account showing the process and her final tattoo of her 152 closest friends - said the tat wasn't about making a splash.

Personally, we hope she really, really, really likes these friends. Or she's going to have a heck of a time getting those off - with a trip to have one laser-removed any time she has a really bad spat with a friend.

She says the ink was a way to embody, literally, the social media world we are immersed in.

She's not the first one to use social media platforms in an over-the-top way. In fact, many folks on the Web who have seen this tattoo are remembering artist T-Pain, whose "You don't have to 'like' me" tattoo was pictured on CNET. Or perhaps you remember the man in Egypt who reportedly named his newborn daughter "Facebook" in honor of the role the social media network played in bringing about a revolution. Or the Israeli parents who named their child "like." Then there was the guy that Mashable wrote about a few years ago, who was trying to sell Ray-Bans by tattooing a pair of the shades on his face.