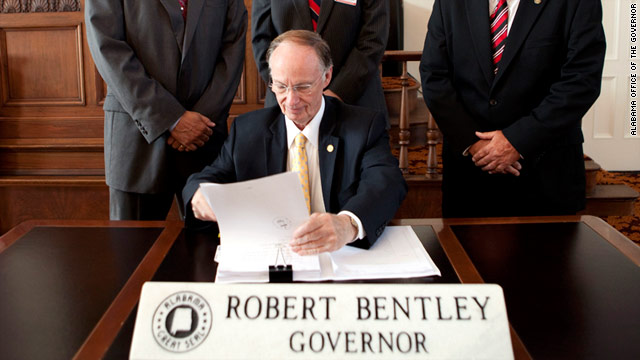 The bill is considered by both supporters and critics to be among the toughest in the nation, even stricter than controversial laws in Arizona and Georgia.

Under the new law, public schools will be required to determine the citizenship and immigration status of enrolling students through sworn affidavits or birth certificates.

Authorities will also be required to detain a person who they believe is in the country illegally if the person cannot produce proof of residency when stopped "for any reason."

Alabama businesses will  be required to use a database called E-Verify to look up the immigration status of new employees. The use of the database was recently endorsed after a U.S. Supreme Court ruling on a separate Arizona immigration law.

Cecillia Wang, managing attorney for the American Civil Liberties Union's immigrants rights project, called the bill "outrageous and blatantly unconstitutional" in an interview with The New York Times before Bentley signed it.