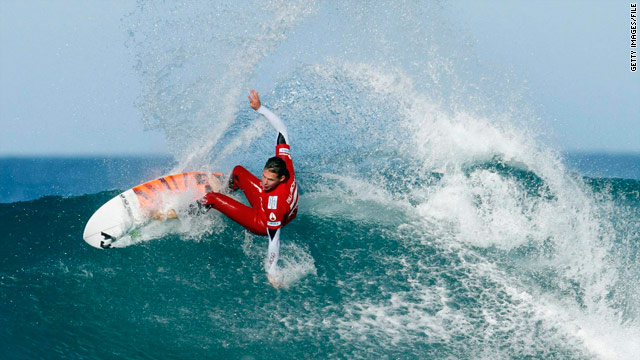 Triple world champion surfer Andy Irons died of a heart attack caused by the hardening of his coronary arteries, his family said in a press release Thursday. Irons, 32, died unexpectedly in November.

Irons had withdrawn from an event in 2010 amid concerns that he and others on the tour contracted dengue fever. He was returning home to Hawaii when he was found dead in an airport hotel while on a layover in Dallas.

But long-awaited toxicology reports and an autopsy, which were held off while his widow, Lyndie, was pregnant with their son, showed that dengue fever did not lead to the surfing star's death.

"A plaque of this severity, located in the anterior descending coronary artery, is commonly associated with sudden death," Dr. Vincent Di Maio, a prominent forensic pathologist, explained to the family, according to the press release.

No other factors contributed to his death, Di Maio told the family.

But the official toxicology report and autopsy from the Tarrant County Medical Examiner notes a second cause of death as "acute mixed drug ingestion."

Di Maio however said he believes most of the the drugs found in Irons' system (Xanax and Methadone) were at therapeutic levels. Benzoylecgonine, which is often tested for when conducting cocaine urinalysis, was also found in his system. A toxicologist that the family consulted said the levels of Benzoylecgonine were "consistent with the use of cocaine at about 30 hours prior to his death."

The report also shows trace amounts of methamphetamine in Irons' system. His wife says she insists the surfing champ did not use methamphetamine, "so it is likely the substance was present in the cocaine he ingested."

Lyndie Irons said that looking back, she does remember a few instances in the last year in which her husband complained of chest pains or occasional heartburn. She said a holistic health practitioner in Australia, whom he visited when he was looking for vitamin therapy, "offhandedly" said the surfer "had the heart of a 50-year-old."

She also said her husband had gotten typhoid fever five years ago, which she knows can damage the heart.

"But Andy shrugged it all off and led no one to believe he was in ill health," Lyndie Irons said.

Andy Irons was known for his battles with world-renowned ten-time champion Kelly Slater, one of the people who got him into surfing.

"It's all about the feeling I get from riding that wave," Irons said in a video for one of the tours called "I Surf Because." "That first wave is the reason why I think everyone keeps coming back."

And making a comeback is just what Irons had done. He had taken a year off, and admittedly struggled with some personal problems, but said getting back into surfing was what helped him get through it.

"I have a lot of inner demons. If I didn't have surfing to get those out of my system, I would self-destruct," he said in the video. "Surfing's the only reason that keeps me going at a normal state. It keeps my life at an even keel; without it, it would just tip into oblivion."